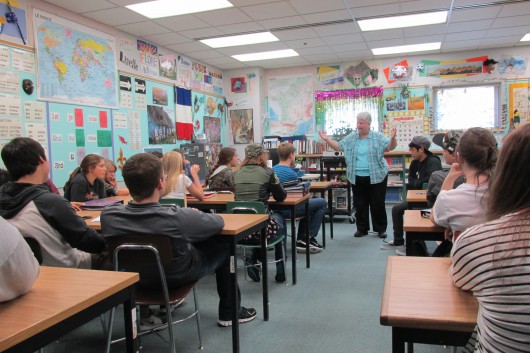 Trina Purcell teaches the newly formed Kayhi women’s choir. The choir was split in two because of increased enrollment.

Enrollment is growing at Ketchikan schools. After a large drop in 2009, student numbers have gradually increased. This year, the current total is 2,230. That’s 20 more students district-wide than last year.

Enrollment went a little up in some schools and a little down in others. Ketchikan High School had the biggest influx, with a 37-student increase.

Kayhi principal Sam Nelson predicted the school would have about 615 students this year. He was close – right now there are 616 students. Nelson has seen that number steadily grow since 2011. Big numbers of underclassmen contributed to the increase. This year, there are 170 freshman and 165 sophomores.

“You can’t get anywhere without running into somebody,” said sophomore Teiara Hayes, who has fully embraced her not-a-freshman status. “When you’re going into the science wing you’ll run into a million freshman at once, just about every period and you’re like ‘Where did you come from? Go away!’”

For some of the elementary schools in Ketchikan, enrollment increases this year prompted them to hire new teachers at the very last minute. At Kayhi, they haven’t hired additional teachers, but they’ve had to shift some classes around. One class that’s been hit by the student increase — choir.

“Before school started, I looked at the enrollment and it was 75 or 80, which is really big but last year we were between 70 and 80 all year so I thought, ‘Okay well we can do that again,'” said choir teacher Trina Purcell. “And then the weekend before school started, it was up over 100.”

On the first day of school, Purcell had to split the choir in two. About 40 girls were moved into a women’s choir.

“I didn’t want to [be in the women’s choir] at first, actually I was switched into by force and I tried to switch back out of it but now I like it,” said sophomore Kayla Admire. She says, even though she didn’t like it at first, the women’s choir feels more comfortable than the co-ed one she sang in as a freshman. 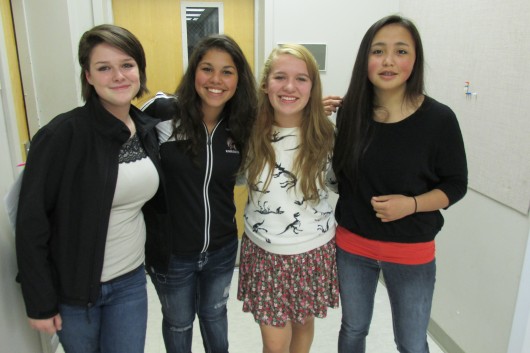 Kayla Admire, Teiara Hayes, Mckenzie Dunn, and Elizabeth Weston are in the women’s choir. They say they’ve noticed the increase in students, especially in the cafeteria.

Admire and a few of the other choir students say they’ve noticed the increase in students this year, especially in the cafeteria.

Not only is the cafeteria packed, but some classrooms are getting fuller. Principal Nelson says foreign language and math are two subjects dealing with especially crowded classes.

Myra Zelensky, or ‘Madame Z’ has a 35-student French 1 class in a room she says has only 32 official chairs at tables.

“And so the little niches, in the back of the room a counter can be used for the overflow. And then there’s a table that has a little corner that a student sits at when we have all 35 here,” Zelensky said.

She says there have always been more students who sign up for foreign language than the school is able fit into the classes. 35 in one room is a lot, but she sees it as a positive thing.

“The one thing that was really bad was when we dropped down to close to 500, it was maybe four years ago, we were really low,” Zelensky said. “I like the other impact, when there’s lots of students and we’re growing.”

But there is one downside to full classrooms.

“There’s always one or two students that you don’t notice that you wish you could’ve spent more time with them, and help them more,” Zelensky said. “So, a few kids fall through the cracks.”

“The child who’s a wallflower is really allowed to be anonymous in a class of 38,” Maxwell said.

He has an Algebra 2 class that started at 38, now it’s at 37. Maxwell says his classroom management is different in the big class.

“If a great classroom is one in which there is banter and discussion, if the group gets too big you can’t have the banter because it gets out of control too fast,” Maxwell said.

Maxwell’s other two sections of Algebra 2 are at 34 and 22 students. He says the numbers vary depending on how the schedule works out. 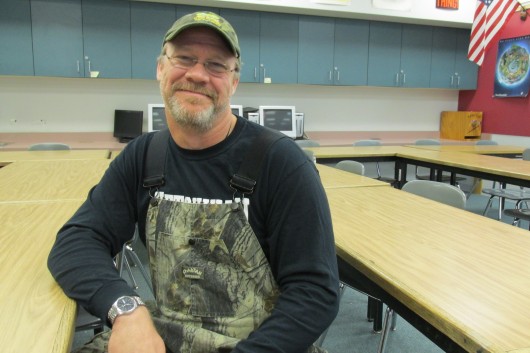 Cole Maxwell has a 37-student Algebra 2 class this year.

“In a high school setting, you have courses that don’t lend themselves to being big,” he said. “Shop class can’t be big, you can’t have 38 kids using a bandsaw. Then we have classes that are just more specialized towards kids. AP Calculus is going to be a small class. And so if we have 600-some kids who during fourth period need to be in a classroom, if you are opposite a number of those small classes, your class is going to be bigger.”

Superintendent Robert Boyle says the overall student-to-teacher ratio at Kayhi is around 18-to-1. There are just some that end up with high numbers because there’s more demand.

Recently, the Ketchikan School Board discussed how the district’s gradual increase might turn from a trickle to a flood because of big projects like the Alaska Class Ferry contract and the hospital expansion. So, how much growth can Kayhi handle?

“I think the building at one time back in the day when the pulp mill and stuff were running, they were running 700, 800 kids here,” said Principal Nelson. “So I’m sure the building could handle that much.”

Looking at the numbers from Shoenbar Middle School’s and Revilla Alternative School’s 8th grade classes, it looks like there will be fewer freshman next year. But we won’t know for sure until the first day of school.