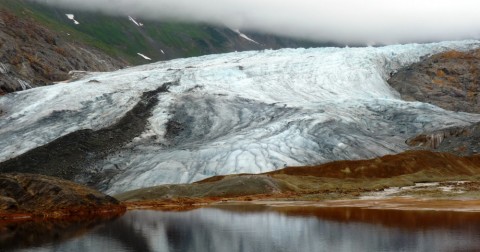 A glacier reflects in a naturally occurring pool of rusty, acidic water at the site of one of the KSM Prospect’s planned open-pit mines. The British Columbia project, northeast of Ketchikan, was granted permits for roads and camps. (Ed Schoenfeld, CoastAlaska News)

A controversial British Columbia mine northeast of Ketchikan has gained some key permits needed for construction.

But the KSM project still needs other government approvals – and large investments – before mining can begin. Also, a company with nearby claims says it must also grant approval.

Spokesman Brent Murphy says the new permits allow construction of two roads from a central B.C. highway to the mine complex, about 20 miles from the Alaska border.

“Right now, we’re relying on helicopters, which are a very expensive way to access a project. So these are significant for us because it will allow us to start building an alternative means of accessing the project,” he says.

Road construction is expected to cost more than $200 million. 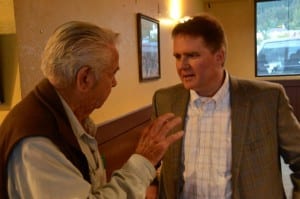 Murphy says work could begin in about a year, if remaining permits are approved.
But first, mine owner Seabridge Gold must find investors for the $5.3-billion project.

“That construction could start, should we have a partner in hand. And we remain hopeful that we will have a joint venture agreement in the very near future,” he says.

The permits, granted in late September, cover air and water discharges from the project’s construction camps.

Seabridge says they also cover rights of way needed to build a pair of 15-mile tunnels connecting the ore body and the processing facility.

But Teuton Resources Corporation, which has mineral claims in the tunnel area, disagrees.

In a press release, it says full construction permits require an agreement covering ore of value found during drilling. Teuton says no such agreement has been reached.

Some Alaska tribal, fisheries and conservation groups want the KSM to undergo more environmental scrutiny. They say the mine could damage salmon runs on B.C. rivers that flow through Alaska or enter the ocean nearby.

Critics also say the mine is of no value to Alaska, since all the work will be done in British Columbia.

They’ve been lobbying for what’s called a panel review, which would involve further examination of mine plans.

KSM’s Murphy says that would push back construction, which would increase costs.

“It would add a significant amount of delay into the process, obviously, for our final environmental approval. And the time delay on this could be anywhere from 18 to 24 months,” he says.

Murphy was in Juneau Oct. 3 to meet with government regulators and business leaders. He was interviewed after a presentation to the Juneau chapter of the Alaska Miners Association.