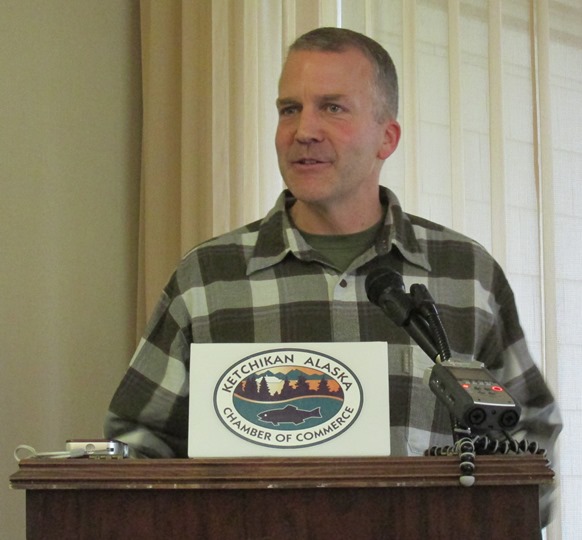 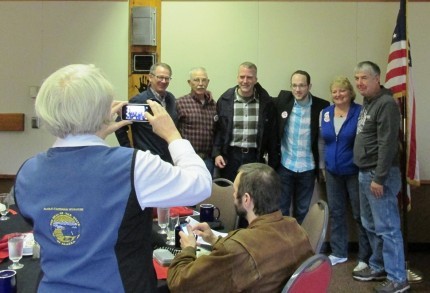 Local supporters take a photo with Senate candidate Dan Sullivan following his presentation at the Ketchikan Chamber of Commerce on Wednesday.

U.S. Senate candidate Dan Sullivan stopped in Ketchikan this week as part of his continuing campaign tour around the state. He spoke during Wednesday’s Chamber of Commerce lunch, and told those in attendance that he wants to roll back what he calls the “Obama agenda.”

But, Sullivan told the Ketchikan Chamber that he wants to move away from the negative and focus more on an optimistic view for Alaska’s future. He cited advances at Ketchikan’s shipyard, the eagerness of the state’s youth to get involved, and some successful efforts to reduce federal interference in resource development projects.

Sullivan said he wants to turn the federal government into part of the solution rather than an impediment.

“We’ve been laying out a vision. It’s not a Republican vision, a Democrat vision, it’s what I think Alaskans, and what I think Americans want,” he said. “It’s policies of rolling back a regulatory state that’s out of control. It’s definitely the one issue that every single Alaskan, no matter where they are, thinks the federal government is trying to overregulate way too many aspects of their lives.”

Sullivan talked quite a bit about the Affordable Care Act, commonly referred to as Obamacare, and how he would work to scale back the regulations that law has put into place.

Audience member Jackie Williams asked for more details about Sullivan’s opinions on health care. Sullivan had said that Obamacare hurt Alaskans because the cost of insurance has increased.

Williams argued that socialized medicine would make health care available to everyone, including the poor who now can’t afford health insurance.

“Why should the guy who sits at the head of the insurance company table get a $30 million bonus at the end of the year for making a profit off people who can afford it, who still have to pay on top of their premiums?” she said. “Why should he get $30 million and all the rest of the people like me don’t count because we can’t afford to pay into his $30 million bonus? So what about socialized medicine? Are you dead set against it? Are you pro-insurance companies?”

Sullivan said that this election is critical, and control of the U.S. Senate depends in part on how Alaska’s race turns out.

“Whether we have an agenda with a federal government that will be a partner in prosperity, 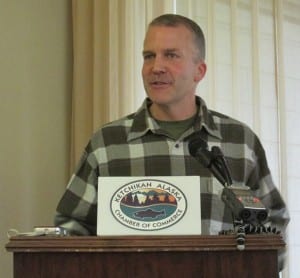 or in my view, a federal government with Harry Reed as Senate Majority Leader, rubber-stamping Barack Obama’s policies for the next two years,” he said.

Sullivan said that who decides to show up on Election Day will make the difference in this close Senate race.

Sullivan is the former commissioner of the Alaska Department of Natural Resources. Before that, he served as Alaska’s attorney general from June 2009 until December of 2010.

Following his presentation, Sullivan answered a question that had been suggested by a KRBD listener, who wondered whether Alaska Gov. Sean Parnell had ever asked Sullivan for advice when he was attorney general regarding allegations of sexual abuse in the Alaska National Guard.

“No,” he answered briefly, before quickly changing the topic to another case he worked on as attorney general.

Those allegations, and Parnell’s response to them, have been a point of great interest recently, especially as Parnell runs for re-election.

In addition to Sullivan and Begich, there are a couple of other candidates for U.S. Senate who will be on the general election ballot. They are Libertarian Mark Fish of Big Lake and independent Tom Gianoutsos of Anchorage.

The general election is Nov. 4.