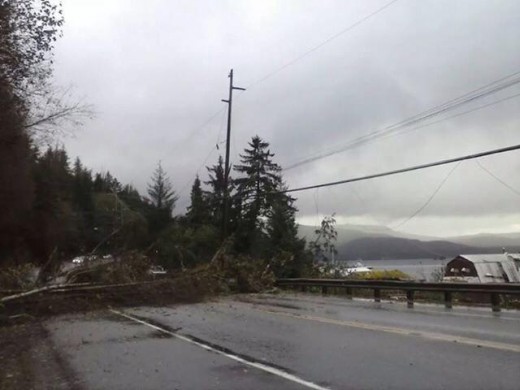 A photo of Monday’s landslide, submitted by a KRBD listener.

A landslide Monday afternoon in the Ward Cove area blocked traffic for several hours, and took out power to Ketchikan’s North End residents until early this morning.

Ketchikan Public Utilities Electric Division Manager Andy Donato said rain and wind led to the landslide, which knocked out all the power lines in its path. Donato said the timing of the landslide, blocking the only road leading to the North End, added to the challenge.

“This happened right around rush hour, if you can think that we actually have a rush hour,” he said. “So by about 4:30, when the outage was realized, things started to progress and by the time we got vehicles en route, soon approaching 5:00, we couldn’t get close enough. There was about a three-mile backup.”

Donato said they eventually were able to get an escort from Alaska State Troopers to get to the site. Alaska Department of Transportation crews also were there, working to clear the debris from the highway. That and trying to allow traffic through as soon as possible took time.

“I’m going to say it was probably around 8:00 before we had everything cleared and tagged up to do the repairs,” he said.

Donato said the KPU crew started getting power back to affected areas at around 6:30 in the morning – about 14 hours after power had been knocked out. He said seven linemen and three traffic control crewmembers were on site, so he believes there were enough people there. It was simply a big job.

“Many of the customers wanted to know why it was taking so long,” he said. “The only thing I could answer was that it was that messed up. If a shorter fix would have sufficed, trust me we would have been on the shorter-fix scenario.”

Donato said that the terrain and weather in southern Southeast Alaska can lead to challenges in utility maintenance. He noted another recent landslide that blocked the access road to Silvas Lake hydroelectric dam; and there was yet another slide that briefly affected Ketchikan’s primary water supply.

Donato said that KPU does try to mitigate problems by taking out potentially dangerous trees, but it’s difficult to predict which ones are going to come down.

“We were going to cut some trees. In fact, they were scheduled for today, in this very area,” he said. “What’s interesting is the trees we identified were about 200 yards away.”

So, even if they had been cut, the slide still would have happened.

Donato praised KPU’s linemen for working through the night in rough weather.

“The guys that worked in the buckets in the dark last night, they really do deserve a thank you. Just a tremendous job,” he said. “I can’t believe how they work up so high in those buckets, and the kind of work they do, hauling that stuff up there and mounting it, and how they’re comfortable doing that.”

Donato also thanked KPU customers for their patience while the work was ongoing.