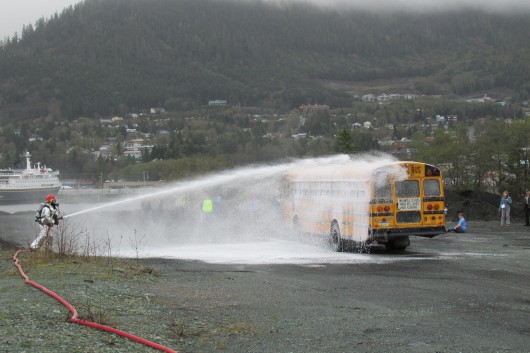 An emergency drill at Ketchikan International Airport this month gave local responders a chance to learn what needs to be done in case an airplane ever careens off the runway.

There are people with lacerations, head injuries, a young girl with scissors sticking out of her neck and a woman with her arm missing from below the elbow. It’s a horror show, but one where all the victims are laughing, gossiping and eating donuts.

“My injury is an upper arm laceration,” said Robbie Wickman. “I’m pretty much going to be wandering around the field in front of the plane, muttering to myself, acting real calm and quiet and when the people come up to treat my injury, I’m just looking around oblivious to what happened to me and everything.” 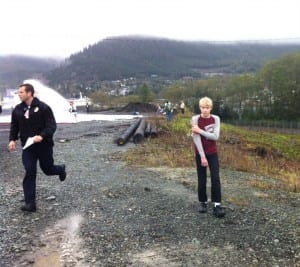 wounds applied. They have a variety of injuries for the emergency responders to deal with. Cristelle Norcio is another young volunteer, who is keeping what looks like a basketball from falling out of her sweatshirt.

“I’m a pregnant lady, seven months and I’m about to upgrade to go into labor,” she explained. “It feels uncomfortable, because it’s my first time.”

“I have a big bruise and I have to limp,” she explained.

“I like when rain falls on me, but I can’t live when something’s just slowly going down your face, I just have to wipe it off,” she said.

So, they gave her the bruise, and told her to limp and wander around the crash site. 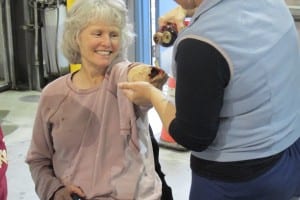 A cheerful volunteer victim gets a fake amputated arm wound applied before the drill.

“In just a couple minutes, we’re going to get on the bus, we’re going to take you guys down and we’re going to start the drill shortly after that,” he said. “It’s probably going to be a little while down there, just hang tight. Once the responders start showing up, act your part. It helps out. Last chance at the restroom if anybody needs to do that.”

A school bus is the stand-in for a crashed airplane, and once it’s in position, in a gravel area down an embankment from the runway, the victims get out and position themselves. Those who can walk wander aimlessly, others lay motionless on the ground. Everyone is happy that the rain held off.

The airport’s fire response vehicles are the first to arrive, and the responders quickly spray 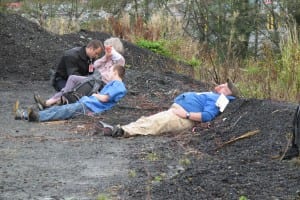 down the bus with foam fire retardant.

The victims who can walk are directed to head toward the airport’s equipment building, to wait for emergency medical technicians. It takes a while for the EMTs to arrive, because they have to wait for the airport ferry to get them from the main island to Gravina Island, where Ketchikan’s airport is located.

The EMTs head straight for the crash site, where the most badly injured remain. Those who walked up to the building have to wait. Finally, a couple of responders show up, but things don’t really get organized until South Tongass Fire Chief Steve Rydeen shows up and starts giving direction.

“We had three people doing triage. We sped them up, we got a count, so right now we prioritized the first ones to go out, which is the pregnant one that’s hurt,” he said. “I don’t have time for a baby here.”

All the victims are eventually taken by ambulance to the hospital, where an emergency treatment center is set up.

About a week after the drill, Adam Archibald is preparing to get together with other responders, to talk about how it went. He says that overall, the drill was productive, and showed where improvements can be made. For example, Archibald would like more readily available supplies on hand at the airport, such as backboards. 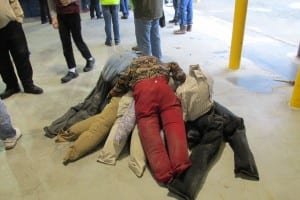 A pile of fake dead bodies lies waiting to be used for the emergency drill.

One general area that could be improved is response time, although that will always be hindered by the location of the airport, on an island separate from most of the emergency responders.

“In a real incident, we would have been able to have a second ferry operating within an hour, and that would have helped to improve the response time,” he said. “However, we do live on an island and we do have limited resources for some of that.”

Archibald says each of the response teams that participated in the drill will evaluate their own performance, and come up with ways to improve in case they ever need to use their practiced skills in a real-life emergency.