Coast Guard assisting in rescue off BC coast 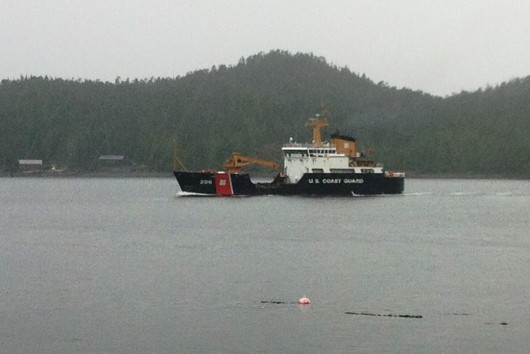 The U.S. Coast Guard cutter SPAR heads south down Tongass Narrows on Friday, toward the Queen Charlotte Islands, to help with a drifting freighter in Canadian waters.

A 440-foot 11-crew freight vessel, the Simushir, ran into engine trouble off the coast of British Columbia’s Queen Charlotte Islands late Thursday or early Friday morning. The Russian-flagged vessel was disabled and adrift, with about 167,000 gallons of fuel on board.

“We also have the Coast Guard Cutter Spar, a 225-foot buoy tender homeported in Kodiak,” he said. “They were on patrol in Southeast and they are currently in Ketchikan. They are onloading the State of Alaska’s emergency towing system, and they will be heading down to provide assistance as well.”

At about noon on Friday, the SPAR was underway, headed south through Tongass Narrows.

Wadlow says the Canadian Coast Guard is heading up the efforts, and the U.S. Coast Guard will be there for backup only.

“Several of their vessels are preparing to get underway to render assistance to the vessel that is adrift,” he said. “There is also a tugboat that is being diverted to hopefully take this vessel in tow.”

Wadlow noted that the Canadian Coast Guard cutter Gorden Reid was on its way, and was expected to reach the disabled freighter by 3 or 3:30 Friday afternoon. Both agencies will know more about the ship’s condition at that point, although there’s no indication that the Simushir has gone aground.

Dan Bates, spokesman for the Canadian Coast Guard, did not immediately return a call seeking information.

The Queen Charlotte Islands are about 250 miles south of Ketchikan.