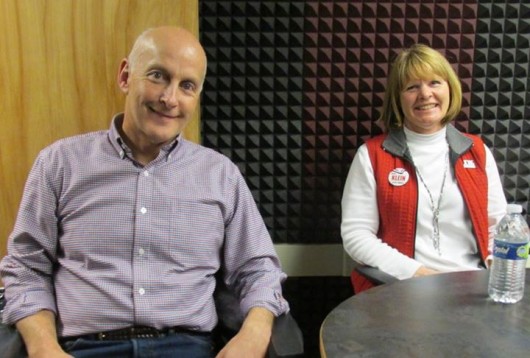 While the two candidates agree on some issues, such as promoting resource development and making sure the Alaska Marine Highway System remains viable, they have some clear differences, as well.

One such area is Medicaid expansion. In response to a question from a listener, they gave opposing viewpoints on whether the state should expand that service through the federal government’s Affordable Care Act, often called Obamacare.

Ortiz said making that move also will give people access to health care who currently can’t afford it.

Klein, however, said she believes expanding Medicaid would be a fiscally irresponsible decision.

“It came out of Obamacare, and as everyone knows, Obamacare is nothing like it was purported to be,” she said. “It was supposed to not cost anything, and it has cost businesses, it has cost individuals, there’s huge costs associated with that. So I think we’re wise to continue to look at it and make sure it’s something we can sustain.”

Ortiz questioned Klein after her comment, asking whether she believes it’s a good thing for people to be able to afford health care. Here’s a little of their exchange.

“But if Medicaid expansion gives access for people to health care insurance for people who previously couldn’t provide it, that’s a good thing, is it not?” Ortiz countered.

“So is Obamacare, and that’s costing us a tremendous amount of money,” Klein answered. “Of course, we would love to dream that we would all be covered with health care, that we would all have our own houses. There’s a lot of things we can dream, that we want. But we have to make sure that it’s something that we can sustain.”

Ortiz also plans to vote no on the marijuana initiative, but said he is a yes vote on minimum wage and Bristol Bay.

You can hear their explanations — and their thoughts on other topics, such as the Ketchikan Gateway Borough’s lawsuit against the state, Gravina access and oil taxes – by listening to a recording of the one-hour candidate forum. Click on the audio file below.