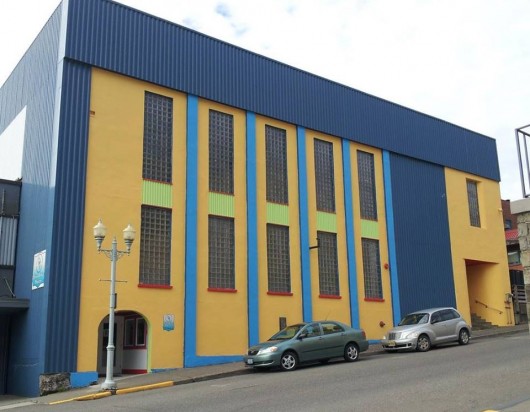 After months of holding steady, the Ketchikan Performing Arts Center project is moving forward. The PAC committee has hired a California-based architect, who will work with a local firm on design plans. The first phase of that design is expected to be complete by early next summer.

About five years ago, Ketchikan’s community theater organization, First City Players, teamed up with the Ketchikan Theatre Ballet dance school. Their goal was to purchase and renovate downtown’s historic Fireside Building into a performing arts center, complete with rehearsal space, dance studios and a theater that would serve a variety of performance needs.

The purchase was successful, a small portion of the building was renovated to provide an office for First City Players, and the exterior received a cheerful paint job.

Other than that, though, it’s pretty much been a waiting game, while the PAC Committee raised the funds needed to get started on fully renovating and updating the 1940s-era building. The group was able to afford a feasibility study, though, which committee member Jennifer Tucker said was an important first step.

“The feasibility study showed us that yes, there is the square footage in here that will work for this and yes, the building will handle this kind of rehabbing and refurbishing,” she said.

That feasibility study will be used by the newly hired design team. Tucker said California-based John Fisher has a lot of experience turning challenging places into performance spaces.

“He’s even turned an old dairy farm into a performing arts center,” she said. “He’s really passionate about refurbishing buildings into these interesting places. He’s actually doing one in New York right now. He’s one of the best.”

Tucker said that Fisher and local architect Linda Millard have teamed up before on the design for Sitka’s performing arts center. So, Fisher is familiar with the needs of a small Alaska city, and they’re both familiar with each other.

In addition to the feasibility study, the design team will receive guidance through meetings with various stakeholders. Tucker said that’s a key part of the process.

“Because this is not just a First City Players building; this is a community arts center,” she said. “We are going to be pulling in other key people from other user groups, to ensure that some of their needs are met as well.”

Tucker said there is a clear need for a building dedicated to the performing arts. There are other spaces that will continue to be needed – such as the Ted Ferry Civic Center and the Ketchikan High School auditorium. But those spaces often are booked for other events, or don’t quite meet the needs for a planned performance.

The Kayhi auditorium, for example, is too large for many First City Player theater productions.

“It really is. It’s hard to try to constantly try to do anything that’s going to fill up 800 seats. And that stage is too big,” Tucker said.

She said Fisher has some experience designing modular theater spaces that can adapt to different shows.

“So, that means he can get us the type of seating that can move and stack in different ways,” she said. “So if KTB has a dance recital, we can move it in different ways, we can do theater in the round, you can make more of a traditional seating stage for the community chorus, there’s a lot of really exciting things that he’s done with his experience, and not we are going to really benefit.”

The design work is expected to be 30-percent complete by mid-June. And will that include an image of what the space will look like when it’s complete?

“Yes, which is really exciting,” Tucker said. “To be able to touch it and feel it and know. Thinking spatially is often very difficult, to have that picture in your head and to understand the design. It’s hard. Sometimes you need to have something physically in your hand. Like Legos.”

The 30-percent design is paid for through a $125,000 grant from the State of Alaska. Once that first design phase is done, the Performing Arts Center committee will have a better idea of what’s needed to complete the project.