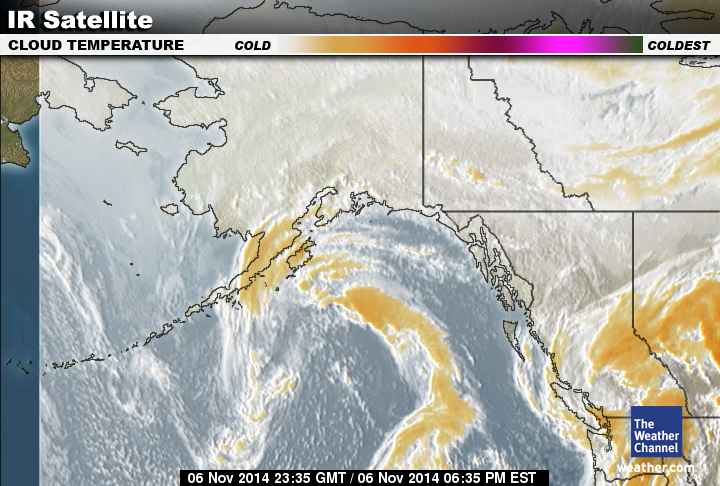 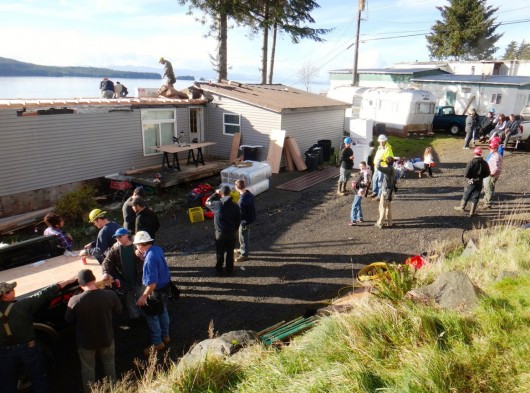 A crew from the Vigor Alaska shipyard showed up to reconstruct their coworker, Kristin Gilliard’s, roof, which was damaged during Wednesday’s wind storm. (Photo by Rosie Roppel.)

The storm kicked up a bunch of salt water from the ocean, and blew that salty water onto important equipment that keeps electricity flowing through the Ketchikan Public Utilities grid.

And then, the wind stopped, the rain stopped and stuff dried off. KPU Electric Division Manager Andy Donato said the really nice morning following the storm was the root of the problem.

That’s when surrounding air molecules are ionized, creating a tiny spark. Or, in this case, a whole bunch of sparks.

“Those that were seeing it, they could see dancing of sparks on all the energized lines,” Donato said. “And it reached the level that we finally popped breakers here at Bailey, and we lost everything from the Ketchikan substation all the way north.”

That was about 5:30 a.m., and it took nearly six hours to get everyone back online again. It took that long, because they had to figure out what to do with all the salty residue before they could start switching power back on. So, they called the fire department, which sent over a pumper truck to rinse everything off.

“It’s not something that the fire department normally does,” said Assistant Fire Chief John Dorman. “The reason we were able to was because all of the power was totally dead in and out of there. Essentially what we did was created a rainstorm to wash off the salt that was on the insulators.”

Donato stressed that they carefully checked to make sure everything was shut down, with no electric currents possible.

“So we showered everything and gave all the insulators and devices a good rinse, we moved the pumper truck across Tongass (Avenue) and fired up on the risers for the north and south transmission lines, moved down to the yard serving the shipyard, and when it was all done, we were able to energize,” he said.

They couldn’t rinse off the whole system, though, so there still is a corona effect on many of KPU’s power lines. Donato said that could cause problems, but rain in the near future should rinse it off.

Over on Prince of Wales Island, there were not any widespread power problems. Alaska Power and Telephone Operations Manager Greg Mickelson said Hydaburg went dark for about three minutes, and one home in Hollis was without electricity overnight after some trees came down on a line serving that residence.

Tim Stessen, a meteorologist with the National Weather Service in Juneau, said the storm was part of an intense low-pressure system that moved in from the northeast Pacific.

Stesson said the strongest gust recorded on the ground at the Ketchikan airport was 62 knots at around 7 p.m., and gusts on the airport roof were as strong as 75 knots. That translates to 71 mph on the ground and 86 mph on the roof.

“Annette (Island) also had a wind gust up to 67 mph,” he said. “So it was a very fast-moving system with very strong winds. It had very good what we call upper-level support for very rapid development.”

That means winds in the upper atmosphere were blowing almost 200 mph, and those winds helped create the low-pressure system further down in the atmosphere, which makes storms for us here on the ground.

In addition to area power problems, at least one resident’s roof was damaged in

the storm. The Ketchikan International Airport Ferry had an issue with a malfunctioning generator, so the ramp was inoperable for a few hours Thursday morning. They continued to run the ferry for foot passengers only, using the nearby seaplane dock instead.

Airport Manager Mike Carney reports that three flights were cancelled Wednesday, and two flights were delayed Thursday morning. Another storm is forecast for late tonight into Friday morning. It’s not as intense, though, and it’s expected to diminish by Friday afternoon.