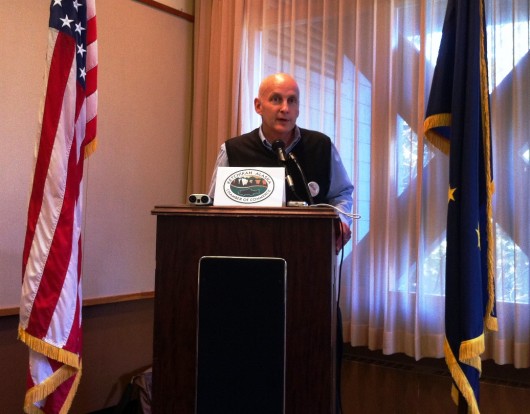 Dan Ortiz talks to the Ketchikan Chamber of Commerce about his bid for state House.

With independent candidate Dan Ortiz in the lead by 102 votes, the House District 36 race is unofficially over, according to Alaska Division of Elections Director Gail Fenumiai.

“We have no ballots left that will affect that race at this time,” she said Friday afternoon.

More than 600 ballots were counted Friday for the district race, consisting of mostly questioned ballots. The newest numbers bring the total for Ortiz up to 3,527 votes, or 50.57 percent.

Fenumiai said Friday’s count completed the last of the ballots in the House District 36 race, unless some are received next week that were mailed from overseas. The deadline for overseas ballots is next Wednesday.

However, Fenumiai said it’s unlikely that any ballots mailed from overseas would change the results.

“We see very few ballots trickle in statewide between today and next Wednesday,” she said.

The race has been extremely close from the start. Following the Nov. 4th General Election, Ortiz was ahead by 19 votes. One week later, the two candidates switched places after a count of absentee and early ballots. That count put Klein ahead by nine votes until Friday.

Ortiz said that while he knew the most current numbers, he hadn’t yet heard that the race was over.

“I’m obviously pleased and still guarded though,” he said. “I’m not claiming victory at this point. I’m not aware of how many votes are potentially still out there.”

No matter what, though, Ortiz congratulates Klein on her campaign.

“Very energetic and very thorough and they certainly were worthy opponents, no matter what the outcome,” he said.

“I had some phone calls today, as a matter of fact,” he said. “It’s confidential at this point, but certainly the potential there is to, well, I’m committed to representing the best interests of District 36, including my caucus decision. That’s what I’ll say about that.”

Klein congratulated Ortiz on his victory, and wished him luck in the job. She said she looks forward to taking a little break now, and spending time with her husband.

“I’ve never been particularly one that gets too stressed about things,” she said. “I figure what is meant to be was meant to be. Just go with it and make the best of it.”

Klein said she’s happy with the voter turnout, and said this race demonstrates that everyone’s vote makes a difference.

Klein won’t rule out a future run for political office, or perhaps helping another Republican campaign.