The Ketchikan animal shelter is inadequate for the needs of the borough. Pretty much everyone agrees with that statement, and the Ketchikan Gateway Borough is working toward improving the shelter, as well as the services that the Animal Protection Department provides.

Ketchikan’s animal shelter is a two-story building, tucked into a corner of the community’s cemetery. There’s barely any parking space for the public, the only way to access the second floor is a set of outdoor metal stairs and the building isn’t really accessible for people with disabilities.

And then we go inside: 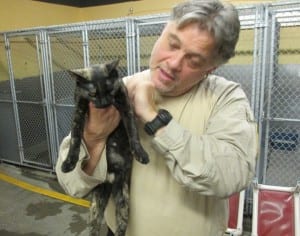 Eddie Blackwood, the borough’s animal protection department director, pets one of the adoptable cats available at the shelter.

Eddie Blackwood, Ketchikan’s Animal Control Director. He says the main kennel area houses cats and dogs, a combination that can be stressful for both species. It wasn’t always that way, though. Years ago, there were separate rooms for cats and dogs.

“This area was just for dogs, and this was the room they had for cats,” he said, pointing out a small space off to the side. “As the years progressed, this became the laundry room, so then they housed cats and dogs in the same room. That’s what we’re trying to get away from with the renovations upstairs.”

Those renovations would take a large second-floor room that used to house the borough’s archives, and turn it into a space for cats.

“So we have this space here,” he said, in the upstairs area. He opens a door to a smaller room, also empty. “This is where they kept the really important documents,” and he says that could become a communal cat area, or a place where visitors could socialize with cats.

Blackwood says the borough has about $100,000 remaining in a fund set aside for shelter improvements, and the renovation plans so far would cost about that much.

The actual renovation is on hold right now, though, while the borough waits for a report from Chava Lee. She is the former director of the Gastineau Humane Society in Juneau, and has been hired by Ketchikan’s borough to assess the local Animal Protection Department. 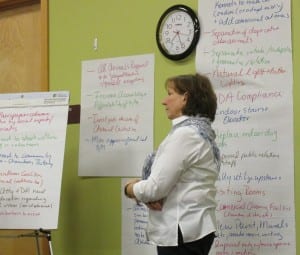 Chava Lee listens to suggestions during a work session to explore options and improvements for the Ketchikan Animal Shelter.

As part of that process, Lee recently led a work session to learn what Ketchikan’s pet lovers want.

“We’re going to start from the premise from all of us that everybody is here because they care,” she said as the group gathered at the Ketchikan Public Library.

Lee split the approximately 30 participants into smaller groups, and had each come up with wish lists for the animal protection department. There were some common themes that arose. Each group wants to increase the number of pets in Ketchikan that are spayed and neutered, for example. Everyone wants a review and update of current animal control regulations, they all support a public education campaign to promote animal welfare and they want improved facilities for animals that are housed at the shelter.

Donita O’Dell is a former shelter employee who now runs her own animal welfare non-profit. Her group had a long list of suggested facility improvements.

“I think it was for both cats and dogs, but looking into flexible housing options using modular kennels and cages, replace cat kennels with condos or adapt existing kennels to create condos, plus add communal cat areas,” she said. 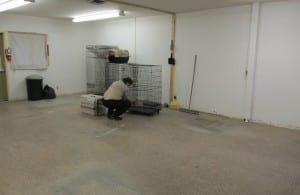 An empty second-floor space at the current shelter building has been suggested as a space for cats.

Lee wrapped up the work session after about two hours. She plans to take all of the suggestions, break them down and send out an email to each of the participants.

“And then I will provide each of you with some of the ideas and suggestions I have, and you can email me back and say, ‘That was a fabulous idea,’ or ‘That was absolutely the worst thing I’ve ever heard,’ or something in between,” she said.

One suggestion that came up was to abandon the current animal shelter building. Lee says she has looked at the former Ketchikan Veterinary Clinic, which now is empty and available for rent. 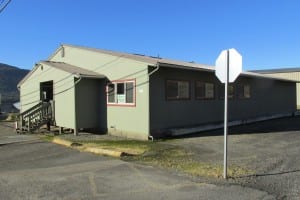 The former Ketchikan Veterinary Clinic, also called the Eichner Building, is a possible alternative location for the borough’s animal shelter.

“I’ve looked at it now three times, and done some preliminary sketches on what I think would be some easy changes with it,” Lee said. “But, it’s not my decision. But I’ll put them out there and the borough is going to have to make those decisions.”

Back at the animal shelter, Blackwood says there might be some advantages to a new shelter at the former vet’s office, also referred to as the Eichner Building.

“The thing that I’m looking at is ventilation systems, I’m looking at space for dogs, maybe inside-outside runs,” he said, noting that there’s room at the Eichner Building for outdoor space, as well as better parking.

But, the borough already owns the current animal shelter building, so it probably would cost the public less to renovate what’s already in place. Either option works for Blackwood.

“If we have to stay here, we’ll stay here,” he said. “If we go to Eichner, we’ll make it work at Eichner. Just waiting for direction – get Chava’s report back and get direction from the Assembly.”

In the meantime, Blackwood and the department’s staff are stepping up their public relations efforts, reaching out to the community to let them know what services are available. They also hope to find homes soon for the 29 cats and one dog now housed at the shelter.