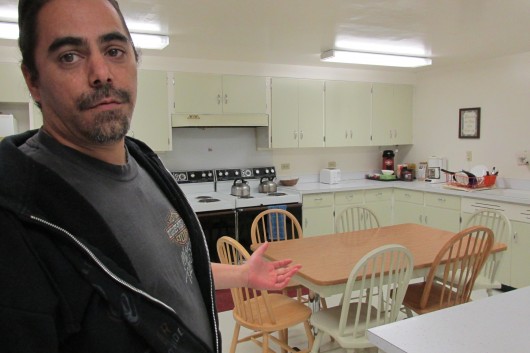 It’s challenging to get exact numbers of how many homeless kids live in Ketchikan, but the number probably is a lot bigger than most people think. A recent public forum in Ketchikan focused on youth and family homelessness. It was hosted and broadcast statewide by 360North TV, part of a year-long project on housing and homeless issues in Alaska.

Ketchikan needs better options for homeless people, particularly families with children, or homeless youth on their own.

One nonprofit organization in the city provides a day shelter, and a separate one offers a place to sleep at night. But those are used primarily by adult men.

Women in Safe Homes, or WISH, helps women and their children, but its primary mission is to help victims of domestic violence, not to shelter homeless people.

There is a Residential Youth Care facility, but again, that’s not meant as a homeless shelter – it focuses on young people who need mental health counseling.

Kaila Del Rosario is one of the panelists who spoke during the forum. She’s an emancipated high school student, and she talked about a friend who is homeless.

“She has so much potential. When she was at school, she had good grades. She just didn’t have a home,” Del Rosario said. “She just started to feel really down about her life, she didn’t know where to go. So she dropped out of school and she’s in the same situation now.”

“ust because they have other things to worry about, like where am I going to stay tonight? What am I going to eat tonight?” she said. “I was one of those friends who would offer, ‘You can stay the night at my house,’ or, ‘Whenever you need anything just tell me.’ But she can’t always stay with me 24 hours.”

Panelist Hailey Beard from Women in Safe Homes said Del Rosario’s friend is one of many homeless youth in Ketchikan.

“One in 10 youth right now in Ketchikan are considered homeless,” she said.

That includes young people who are on their own, as well as those who are homeless with their families.

“Covenant House in Anchorage, they serve 5,000 or 6,000 youth a year. Some of their data suggests that 46 percent of the youth who have aged out of the custody of the State of Alaska have had contact with Covenant House at some point, being homeless,” she said. “That’s mind-blowing to me.”

Parrott said there are foster families that help their foster children transition to living independently, but there’s not enough of them. She said that, usually, kids just need basic help, plus an emotional support base.

“’I want a home to go to at Christmas. I want someone to be able to call when my car breaks down.’ Some of these things are really basic, and some of these basic life skills are barriers to youth who have aged out of the system achieving a productive and successful life,” she said.

Parrott said she’d like to see a transitional shelter that offers that kind of support for youth.

The panelists all agreed that mental health counseling should be a part of any program, to address the emotional trauma that tends to go along with the stress of homelessness.

“It can follow you through your whole life, and it can really be a struggle to be successful,” she said. “I definitely would want those kinds of services to be part of the homeless shelter.”

The Ketchikan Wellness Coalition is working on a plan that would provide more comprehensive services for homeless people in Ketchikan and surrounding islands, from single men and women, to families, to youth on their own.

Lisa Scarborough is a member of the coalition’s homelessness task force, which identified gaps in services and came up with a basic plan to start filling in those gaps. The group is looking at a single shelter to provide a variety of needs.

“A shelter that’s split into three sections: One for men, one for women and one for families,” she said. “One facility, where all of us are pulling our resources together into one entity. That’s the dream.”

The panelists made it clear that Ketchikan has some problems with its homeless services. They say that the next step in addressing that problem, is for the community as a whole to have a conversation about what it’s willing to do.

To listen to the entire homelessness forum, go to the 360North website, where an archived video is available: http://projects.360north.org/roof/