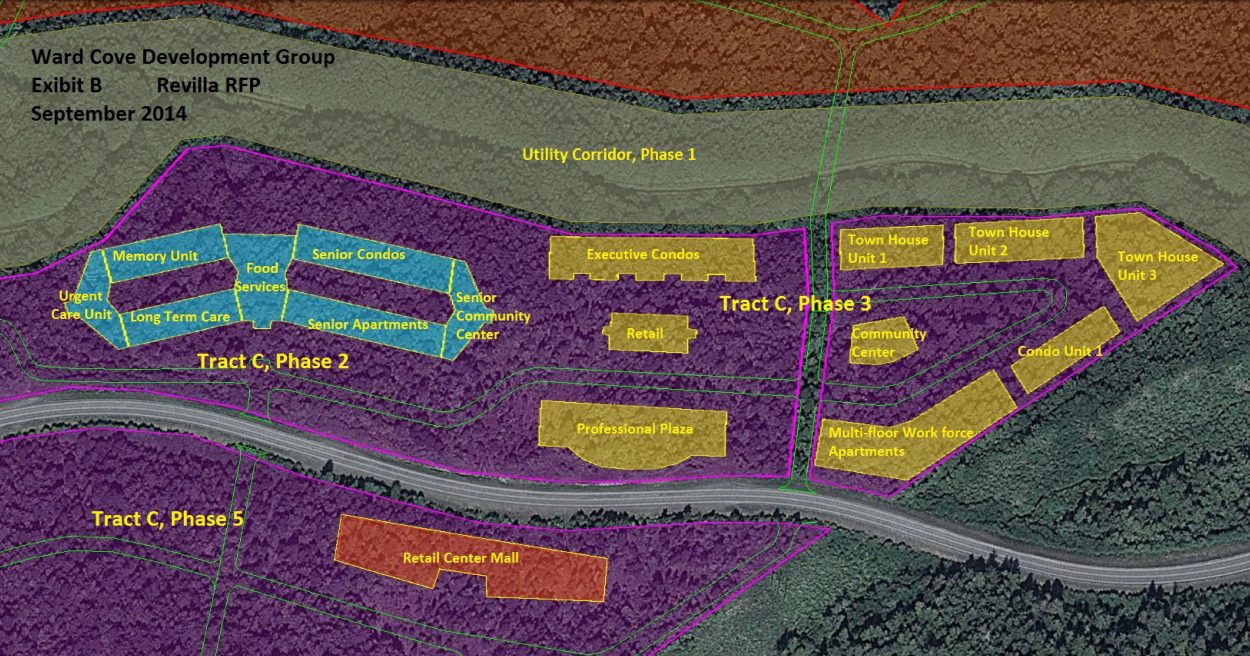 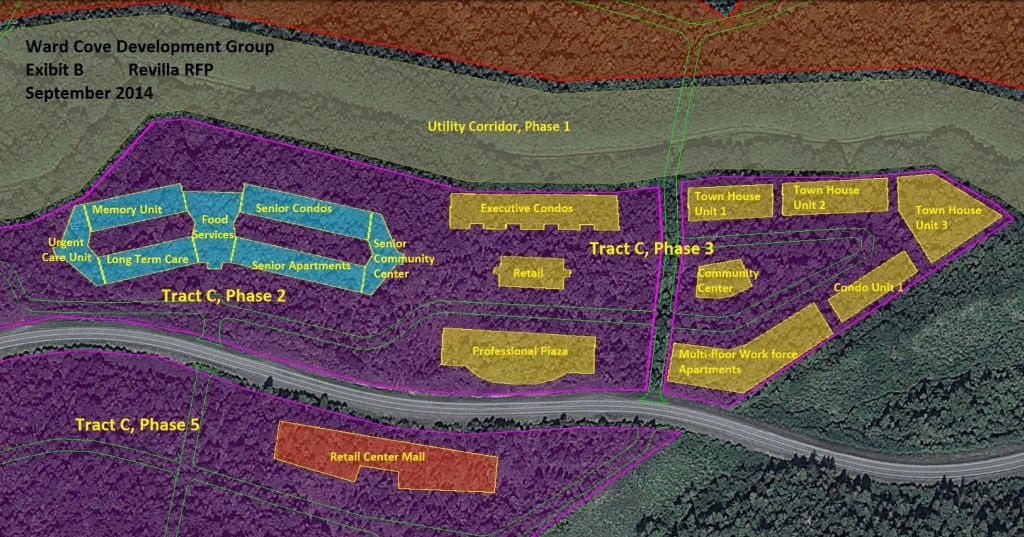 This drawing shows tentative plans for a senior complex along Revilla Road. The plan includes a senior care facility, condos for seniors, and housing and services for employees of the senior center. (Image from Ward Cove Group development proposal.)

As we reported Tuesday (https://www.krbd.org/2014/12/08/assembly-oks-revilla-road-development-planning/), a long-range plan to develop borough-owned land in Ketchikan’s Ward Lake-Revilla Road area is inching forward, albeit with hesitation on the part of the Borough Assembly.

A huge part of the Ward Cove Group’s development plan is a proposed senior housing complex, close to the intersection of Revilla Road and North Tongass Highway. The company’s president told the Assembly that he’s been carefully researching senior centers over the years, and has a good idea of the kind of facility he’d like to see built.

Spokely said his vision for the senior center is a true home, with different levels of assistance and various services, such as an urgent care medical clinic for seniors.

He said one section would be for seniors with memory problems.

“The best place I found Down South was, they have about four rooms that open up into a 20-foot by 40-foot corridor, that corridor has a little coffee shop and sitting area. It looks like someone’s living room,” he said. “So when you come out of your assisted-living room, you come right out into a living room that everybody is combined in. No hallways, no corridors, no place to get lost.”

There would be another section for residents who don’t have dementia, but need regular physical care; and for those residents who can move around independently, Spokely said the proposed facility has places to go.

“The center area is a food court, basically a community area where you can get food and services, a little movie theater,” he said. “Just an indoor community center that you would expect to find in a typical downtown area.”

Another section would offer apartments and condos for seniors who don’t need assistance, but want to take advantage of some of those services offered through the center.

“We’re looking at a senior community that (would) not just serve the people of Ketchikan, but to be an attraction to the rest of the state,” he said. “To invite people so they don’t have to go to Seattle and live without family members, and leave the state of Alaska to get care.”

All this might sound too good to be feasible, but Spokely said he has spent a lot of time researching senior care centers, and figuring out what is possible for Ketchikan.

“Most people take vacations at Disneyland. Ask my wife, our vacations are going through senior centers throughout the Northwest, and urgent care centers, asking them how they operate and how they fund it,” he said.

Spokely said starting the overall development with the senior center makes economic sense, because there is an established need for that service. He mentioned his mother-in-law, who has lived in Ketchikan since 1946.

“She still gets up, still walks every day, whether it’s raining or not all year round and she loves the rain,” he said. “She’s not going south. But at some point, she’s not going to be able to stay in her apartment anymore.”

Spokely said the senior center is for his mother-in-law, and seniors like her, who want to keep on walking in the rain.

Here’s a PDF version of the development proposal:   WardCoveGroupProposal