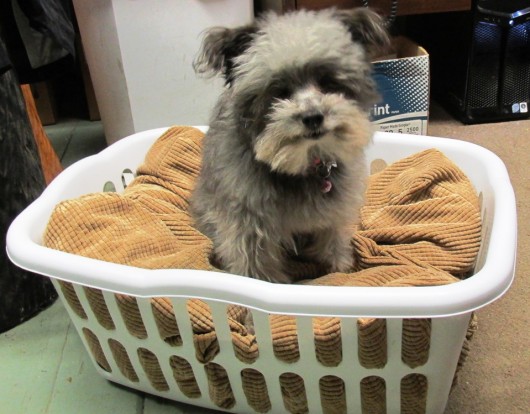 Halo has a warm bed right next to her new mom’s desk.

When people decide to adopt a pet, they usually want a puppy or a kitten – so it can grow up with the family, and, ideally, the family can enjoy the pet for its entire lifetime.

But what happens when a family gives up adult or senior pets, or animals with disabilities?

Halo the dog was born blind. She spent much of her 11 years outside and neglected. But, thanks to the Ketchikan Humane Society, its network of caring foster homes and, finally, a new family, she’ll spend her twilight years in loving comfort.

Halo is a small, gray poodle-type dog. She was born without eyes, and when her new mom, Karen Owings, talks to her, Halo twists her head – adorably — in response.

Owings describes her first encounter with Halo at Groomingdales, a boarding kennel and

pet store that also serves as a home-base for the Ketchikan Humane Society.

“Halo was there in Gretchen’s office. I didn’t see her at first until Gretchen pointed her out and gave me a little background on her. It kind of tugged at my heartstrings, so I went home and talked to my husband and called Gretchen the next day and applied to adopt her,” Owings said. “And here she is.”

“Here” is Owings’ office at Alaska Canopy Adventures, a zipline tour near Herring Cove. She’s not officially supposed to have a dog in the office, so nobody tell her boss. But, Owings says, it’s just during the off-season, and just until Halo gets comfortable with her new family.

“I didn’t want to leave her alone that long,” she said. “Until she gets used to us and 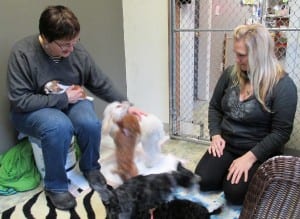 Agnes Moran, left, and Gretchen Moore play with a roomful of small, fast-moving dogs at Groomingdales.

comfortable and has a stable life, because I don’t think her history has been too stable. I just wanted to let her know that she’s OK.”

and fosters many pets for the Humane Society. Moore was one of Halo’s caregivers when the dog first was rescued. During an interview at the kennel, surrounded by playful toy poodles, she recalls Halo’s condition.

“When she first came in, she was very, very frail,” Moore said. “She weighed 4 pounds 3 ounces, and she should have weighed quite a bit more. She was an outside dog, tied up outside, so bringing her in the house, the first few days she did a lot of panting, which is normal when you’re used to being an outside dog and you’re now an inside dog.”

But, Moore says, Halo quickly adapted to living indoors, and despite her blindness, figured out how to navigate the house.

“She would actually count her steps, and she knew exactly where the master bedroom was,” she said. “She would count her steps and then make her little turn, and into the bedroom she’d go. Kind of like a little pony that would pull her feet all the way up and she’d use those as her white cane.” 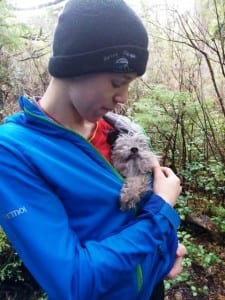 Halo gets a ride during a hike with Agnes Moran’s son, John Coss, when the family was fostering Halo.

Agnes Moran volunteers as a foster home for the Humane Society, and she also took in Halo, who quickly adapted to that new experience, as well. Moran says her 15-year-old son instantly took over, and carried Halo everywhere.

“When we had to go on a trip and we brought her back to Gretchen, Gretchen said, ‘Oh, she gained weight.’ I said, ‘Yeah, because she never walked anywhere,’” Moran said, laughing.

Moran cites Halo’s experience as an example of what the Humane Society does best.

“One of the things about Halo for me, which I always love about the Humane Society, is they get a second chance,” she said.

Heather Muench is a Humane Society board member, and is the one who gave Halo that second chance. She found the dog while “trolling” Facebook. She does that often, because people use social media to get rid of their unwanted animals.

Muench says she saw that someone was giving away an older, blind dog, and knew she had to step in.

“Not everybody is equipped or understands a sightless animal,” she explained. “That was one dog that was going to need someone special. And the first person on Facebook that said, ‘I want it,’ that’s where that dog would have gone. It might not have been doing the dog any favors.”

Placing a special-needs pet is one challenge, but a more common one faced by the Humane Society and the municipal animal shelter is placing older pets: Seniors, or even animals that are just not baby-cute anymore.

But Muench says there are benefits to adopting an older animal. For example, with an adult pet, you know what you’re getting. Also, “maybe you don’t want to commit to another 18 years. Maybe you say, ‘I don’t want to go through puppyhood, those awful teenage doggie 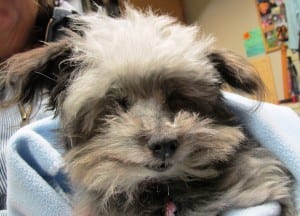 Halo is held by her new mom, Karen Owings.

years. I want to get an 8-year-old dog. They’re calm, they’re quiet, they might not need as much exercise, and that fits better with my lifestyle.’”

Halo appears to fit in very well with the lifestyle her new family. They have a pug that’s about the same age, and Karen Owings says the two small dogs play well together. Halo now has a soft bed, warm laps and plenty of love.

“She’s due for a good turn,” Owings said. “It’s a great house to be a dog. There’s a lot of spoiling going on.”

And that’s all any dog can ask for.

Below are links to the Ketchikan Humane Society and the borough-run animal shelter, where pets that are available for adoption are listed. A newer nonprofit, Southeast Organization for Animals, provides adoption and other services throughout the region. 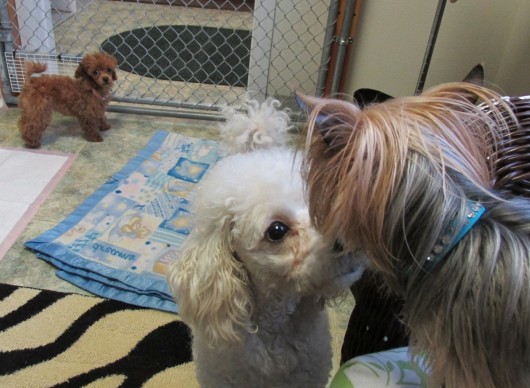 Bowie the miniature poodle sniffs noses with a Yorkshire terrier at Groomingdales while a toy poodle watches in the background.