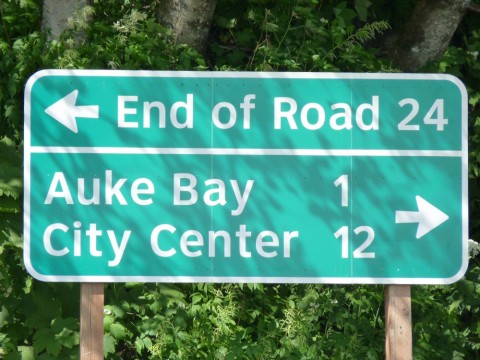 A sign near Juneau’s Auke Bay Ferry Terminal points to the end of Glacier Highway. The road would be extended about 50 miles to a new terminal closer to Haines under a state plan that’s temporarily on hold. (Ed Schoenfeld/CoastAlaska News) 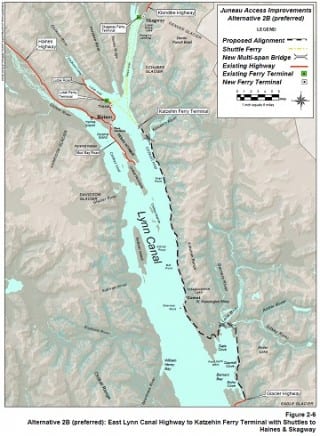 DOT’s preferred alternative would extend Glacier Highway about 50 miles to a ferry terminal at the Katzehin River. (Courtesy Alaska Department of Transportation and Public Facilities)

The Juneau Access Road is one of six projects Walker put on hold during his first month in office.

It would extend the capital city’s highway system about 50 miles north to a new ferry terminal on Lynn Canal. From there, shuttle ships would complete the link to Haines and Skagway.

In his announcement, Walker told state agencies they could complete what’s already paid or contracted for. But he said no additional money could be committed or spent.

“We just finished going through the public involvement process and what we do next is review the comments, respond to comments and evaluate and select a final alternative,” he says.

He says no other work is planned – for now.

“We would have expected to go into design and construction, but that’s been put on hold,” he says.

“Gov. Walker has made a very smart decision to put the brakes on the Juneau Road extension,” says Emily Ferry of the Southeast Alaska Conservation Council.

“DOT’s own study shows the extraordinary cost of constructing and maintaining the road far exceeds the minimal benefits of making weekend getaways a little bit cheaper for Juneauites,” she says.

The agency says the road would do a lot more than that. It also says the project would ultimately save money by shortening ferry routes.

Road supporters, who share those views, say they’re not giving up.

“I’m disappointed in it. I don’t know that that’s the end of the project. I think it’s a bump, probably for all those other projects too. I think they’ll probably all come back at some point in time,” says Wayne Jensen, who chairs the Alaska Committee’s board of directors.

He supports building the road to increase access to the capital city. He remains optimistic.

“The stuff that’s committed is continuing and I think that’s a good sign. They’ve got contracts committed and processes in play. And I expect those will continue until some point in time when either there’s a further delay or the projects are reinstated,” he says.

The proposed $152 million brings the total to be spent to $520 million.

Road projects of a similar value in Anchorage, Wasilla, Cordova and the eastern Interior were removed from the list.

“If DOT is allowed to proceed with the Juneau Road extension, other transportation projects across the state will have to be sacrificed over the next decade,” she says.

It’s not clear when the governor will decide what to do with the Juneau Access project.

“He’s asked for information as far as what would be the downside or the risk of delay or termination. And we are responding to that,” he says.

Walker said low oil prices mean the state cannot afford the road — and the other five projects — right now. The state faces an approximately $3 billion budget gap for the current fiscal year and the same for the next one.

Other projects put on hold are the Ambler Road, the Susitna-Watana Dam, the Kodiak Launch Complex, the Knik Arm Crossing and the Alaska Standalone Pipeline Project.