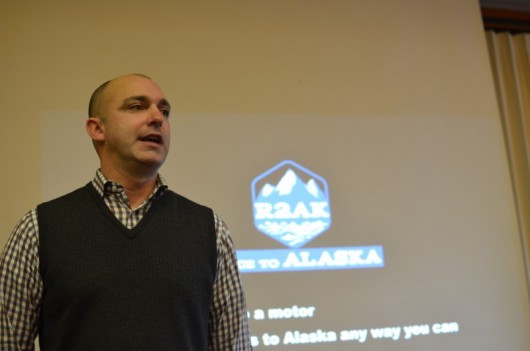 Jake Beattie, co-founder of the Race to Alaska, speaks at the Ketchikan Chamber of Commerce luncheon on Tuesday, January 6, 2015.

The rules are few and first prize is $10,000.  It’s the Race to Alaska, a 750-mile marine sprint from Washington’s north coast to southern Southeast Alaska.

“Really we just wanted to keep it as simple as possible,” said Jake Beattie, the race’s co-founder. “We wanted to strip it down to its bare minimum so the race was as pure as the root itself. Get a boat without an engine. Go to Alaska.”

The starting horn will sound June 4 this summer in Port Townsend, Wash., with the finish line at Ketchikan’s Thomas Basin Boat Harbor. Beattie made his first trip to Ketchikan this week to figure out some logistics and to introduce the race to Ketchikan residents.

The race is designed as an antithesis to a comfortable cruise, and, like the race itself, the people who have signed up are a bit wild. Among them are a chin-up champion, a French sailor, a Canadian kilt manufacturer and a record-holding stand-up paddle boarder, but no Alaskans and no women, yet. The race is still accepting applications.

Beattie said, “I don’t think at this point we’ve said no to anyone but we’ve asked enough hard questions that they came up with the conclusion themselves.”

With no class divisions for sizes or types of watercraft, there has been a lot of speculation about what boat will finish first: maybe a sail boat or a row boat or something altogether new.

“There are at least four new boat designs that have been developed for this route for this race,” he said. “Everything from traditional Polynesian design, but done in carbon fiber, down to the more accessible marine plywood epoxy sort of construction.”

Beattie said he likes to think of the race as, “a cross between the traditional canoe journeys of the Native people that have been plying this route since time began mixed with the winner-take-all, Gold Rush energy that this route really became famous for in European culture.”

While other adventure races may give out more prize money overall, the $10,000 for first is the biggest purse for watersport in the world.

Beattie added “and it’s the only race I know of that gives out steak knives for second prize.”

Although navigating the Inside Passage is a serious endeavor, Race to Alaska maintains a lightheartedness about it, including its homage to the second-place prize from the cutthroat sales competition in the 1992 movie Glengarry Glen Ross .

Beattie said one contestant told him he’s specifically after those knives. There also are racers after nothing more than the experience, using the race as an excuse for adventure.

Live satellite boat tracking will be available online after the race starts in early June. To see rules, maps, who has signed up so far and how to sign up yourself, you can visit www.racetoalaska.com.