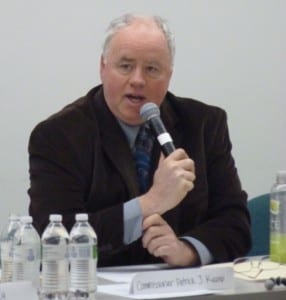 It happened after Kemp disagreed with Walker about his recent freeze of large state transportation projects, including the Juneau Access Road.

Walker spokeswoman Grace Jang says the governor insists on having commissioners aligned with his policies.

The Juneau road and the Knik Arm crossing were among six mega-projects Walker halted after taking office. He said declining oil revenues meant the state could not afford them, at least for now.

Kemp, in a recent letter to Walker’s budget office, stated continued support for the Juneau road. His department also said the federal government could ask for $100 million in grant reimbursements if the projects didn’t proceed.

Southeast critics of the transportation projects were encouraged by Kemp’s departure.

One is Emily Ferry of SEACC, the Southeast Alaska Conservation Council.

“Commissioner Kemp pursued the Juneau road extension with a single-minded focus at the expense of existing roads and the existing ferry system. And he continued to pursue the Juneau Road Extension even when DOT’s own studies showed it didn’t pencil out,” she said.

The former commissioner was praised by road supporters, including Juneau’s Rich Poor, a founder of the group Citizens Pro-Road.

He’s disappointed with Kemp’s departure and Walker’s project freeze. But he understands low oil revenues mean some things will have to wait.

“I know the governor is not playing any kind of favorites because I know they also talked about closing down the project up there, the Knick Arm Crossing,” he said.

Poor said the 50-mile road north to a new ferry terminal closer to the mainland road system is needed to increase access to the capital city.