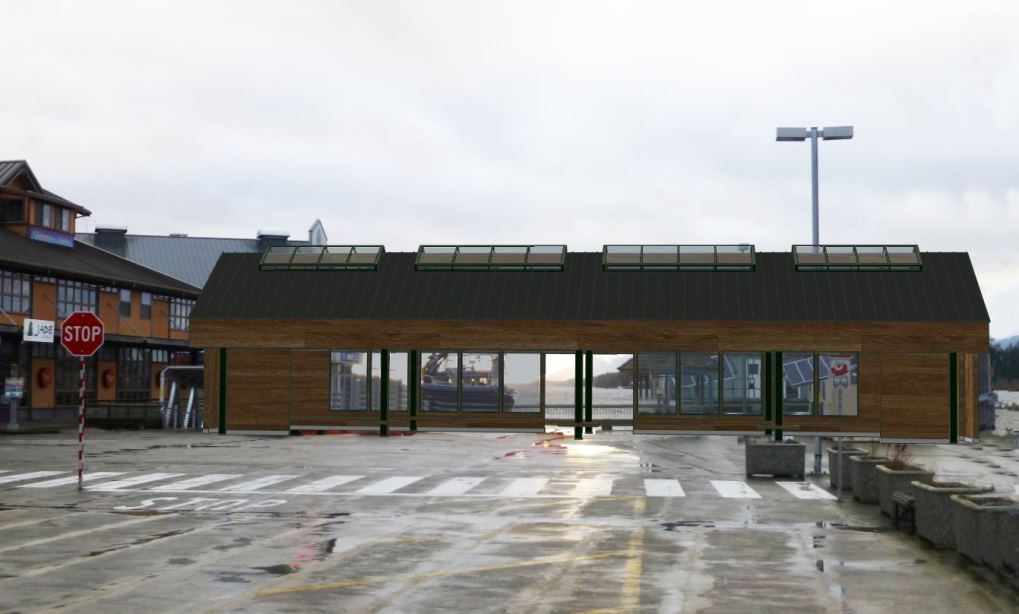 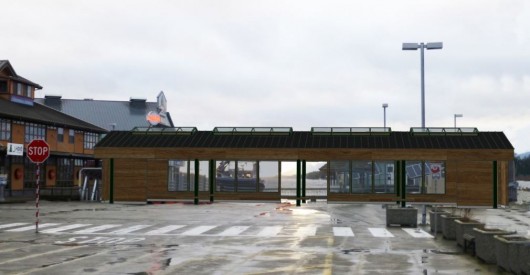 The City of Ketchikan is ready to move forward with the fourth and final phase of its multi-year renovation of the downtown cruise ship dock’s Berths 1 and 2. But, before plans are presented to the City Council for approval, the Port and Harbors Department has scheduled a meeting Tuesday to gather public input, especially on options for a covered shelter at Berth 1.

Port and Harbors Director Steve Corporon said construction on the last phase of the rehabilitation project was scheduled for this winter. But, there was some concern about a planned shelter and whether it was too big.

Corporon said the shelter is an important part of the uplands improvement plan. 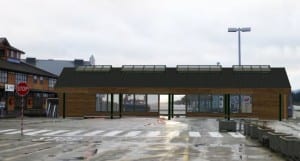 “The other three berths all have a place where people can get out of the rain when they’re waiting for their ship to come in, waiting to pick up their tour groups, waiting to get their bearings when they get off the ship,” he said. “And the input we got, starting with the first public meeting back in November of 2013, is that we should have something down at the base of Berth 1.”

Corporon said the city and its contractors worked with Historic Ketchikan when designing the shelter. The proposed structure was made of wood, open on one side, with glass on the water-facing wall so people could see through it, but it still would offer protection from a typical Southeast Alaska rainstorm. The design also shows a peaked roof, to match the surrounding roof lines. 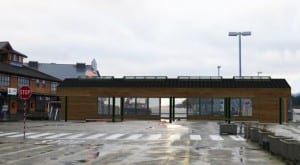 Option 3 shows a shelter with the original structure height, but a lower roof pitch than initially proposed. (Image courtesy City of Ketchikan)

They presented those plans to the Ketchikan City Council last June.

“We were getting ready to go to bid, probably within a month after that. But then there was concern that maybe it was too big. Maybe it was going to block too much of the viewshed,” he said. “We didn’t really have time to go back and dig into it and still meet this winter’s construction schedule, so the City Council directed us to go ahead and put it on hold for a year.”

The main concern with the proposed shelter was its height. Historic Ketchikan wants a steeper roof pitch, because that fits with other historic buildings. But, Corporon said that added to the overall height.

To address that, architect Steven Peters and contractors PND Engineers came up with four alternatives. They also created a computer rendering of each option.

“With these new photos, with these renderings Photoshopped in, it really does let people really see, ‘What will it look like? What will my view be down on the dock if this structure goes in?’” Corporon said.

The four renderings show the original proposal; a second one that’s a little shorter but still 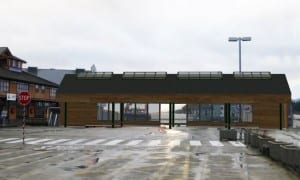 Option 1, the original proposal, has a taller structure and a steep roof pitch. (Image courtesy City of Ketchikan.)

“I do think buildings look more attractive when they have a little bit higher roof pitch, but I do see from these photos how lowering the roof pitch does help the viewshed a little bit,” he said.

Corporon noted some of the other plans for Phase 4.

“There’s a little park area outside where Fish Pirate’s was. Historic Ketchikan I believe is designating that Heckman Park, and it’s going to be putting some benches and planters in there,” he said. “Some bus stop canopies (are planned) for a couple of bus stops at Berth 2 and Berth 1, some cedar screen fence around the electrical transformers adjacent to the KVB building, which eventually will be covered with historical photos we’ll be working on with Historic Ketchikan.”

Another idea Corporon said they’re working on is three 20-foot long log benches for Berth 1. The benches would serve a dual purpose of providing seating and blocking vehicles from pedestrian areas.

If the city is able to make a final decision in the next couple of months, construction on the fourth and final phase of the dock rehabilitation project will start next winter.

Renderings of the four Berth 1 shelter options will be displayed, along with other details of Phase 4 plans, during an open house Tuesday afternoon, from 3 p.m. to 6 p.m. at the Ketchikan Visitors Bureau building on Berth 2. If you can’t make it to the meeting, you can still provide comments by calling the harbormaster’s office at 228-5632.