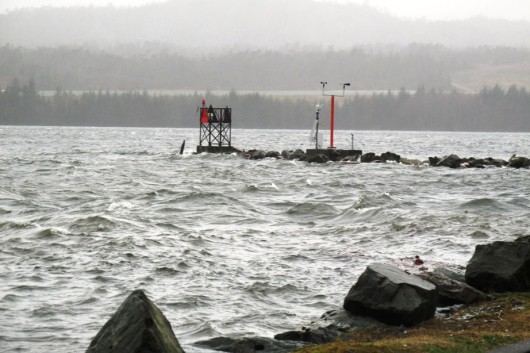 The Tongass Narrows behind The Plaza, seen in late January.

An 82-year-old Ketchikan woman died Monday after apparently getting confused and walking into the Tongass Narrows near The Plaza.

Ketchikan Police Department Deputy Chief Josh Dossett said police got a call at around 11 a.m. that a body had been found on the rocks behind Cedar Point Condominiums.

Police and the city’s Port and Harbors Department worked together to remove the woman’s body from the water. Authorities were able to identify her, and some of the family has been notified.

“At this point it’s still under investigation. We don’t suspect any foul play,” he said. “It appears there may have been some medical issues.”

Dossett said police won’t publicly identify the woman yet, to give her family some time to reach all her relatives.

The woman likely was in the water for just a couple of hours.

“Earlier in the day, we had a report of a female in The Plaza area dressed in the same attire, acting confused,” he said. “Officers responded to The Plaza and were unable to locate her, so we suspect she’d only been in the water a short time.”

Dossett said suicide also is not suspected. He said the woman’s medical issues may have led to her confusion.