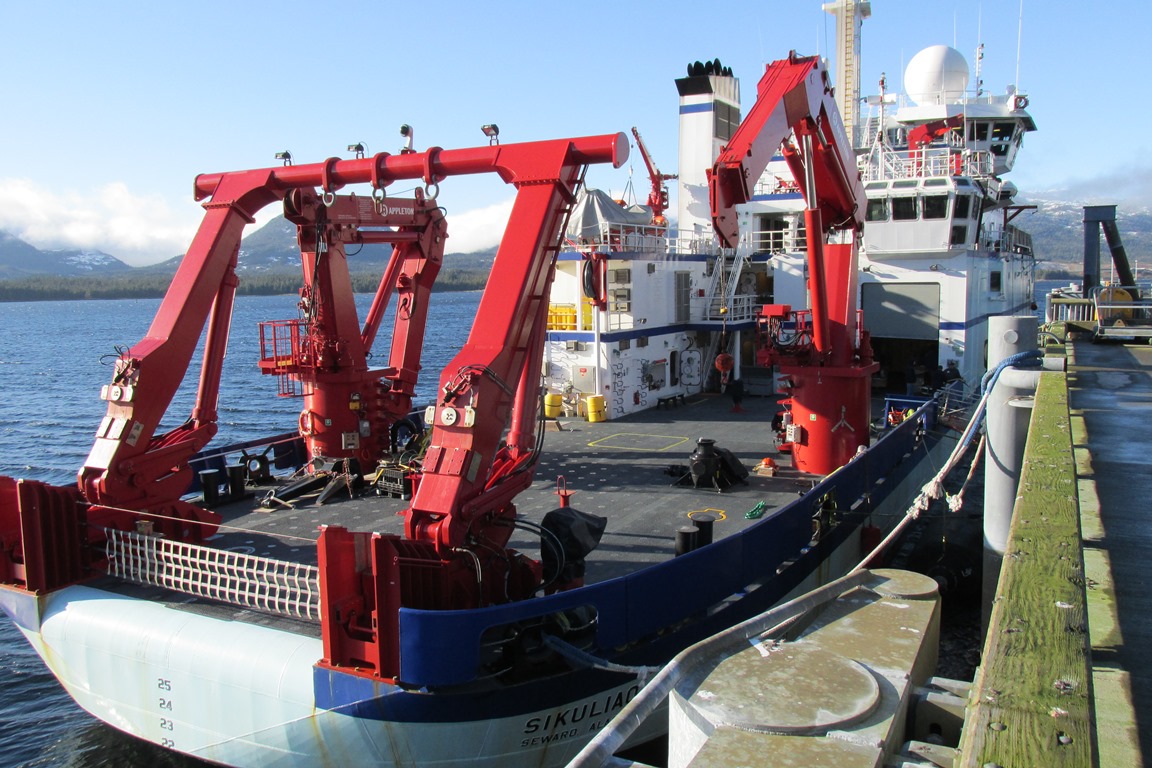 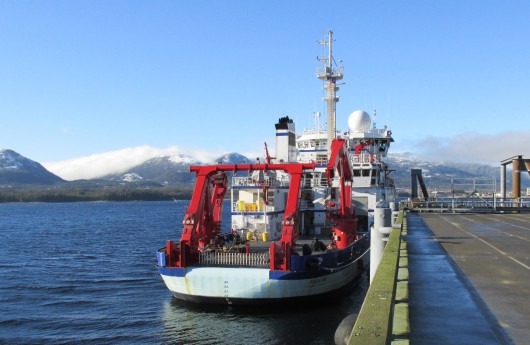 The R/V Sikuliaq is docked at Ketchikan’s Berth IV Monday.

University of Alaska Fairbanks has a brand-new, state-of-the-art, ice-breaking research vessel. Construction of the $140 million R/V Sikuliaq was completed at a Wisconsin shipyard last June, and the ship has been testing its systems since then, with a trip from the East Coast, through the Panama Canal, way out west through the Pacific all the way to Hawaii and Guam, and then back east to its new home waters of Alaska.

The ship arrived in Ketchikan Monday morning for a pit stop on its way up the Inside Passage toward Seward.

It was a brisk, cold, blue-sky day in Ketchikan when the Sikuliaq pulled up to the downtown cruise ship dock. It’s not cruise season, of course, so there was plenty of room for the 261-foot research vessel. 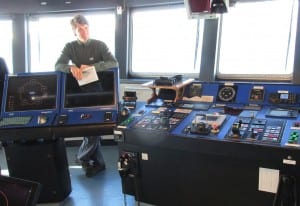 Captain Adam Seamans started a group of reporters off on the deck, then took us through some of the lab areas dedicated to scientific research.

The first piece of equipment he showed us is a large, circular device with numerous metal bottles attached to the outside. Seamans gives a very science-filled explanation of what it is.

“So the CTD, it collects water samples,” he said. “The rosette and the bottles, and then it also has the CTD, which is the connectivity, depth and temperature, so it measures that, does a profile.”

Basically, it takes samples as it descends through the water, showing how the ocean changes at different depths.

Standard now, that is. Gary Freitag is the local representative of the UAF SeaGrant Marine 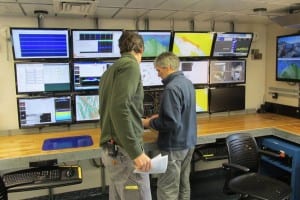 Capt. Adam Seamans and Steve Roberts stand in front of a wall of computer screens on board the ocean research vessel Sikuliaq.

Advisory Program. He was along for the tour, too, and was suitably impressed with the Sikuliaq’s technology.

“It’s a lot nicer than the vessels I used to be on with the university, that’s for sure,” he said. “It’s quite an improvement.”

Seamans said that since completion of the ship last summer, it’s hosted scientists and been involved in a couple of experiments. He passed the responsibility of explaining those experiments on to Steve Hartz, who said the first group of researchers was examining the effects of trawl fishing on underwater mountains.

“They were looking at different seamounts. Some that had been fished, some that they believe never were fished and some that they are still fishing off of,” he said.

“They were looking at magnetic fluctuations,” Hartz said. “They were using magnetometers that they put on a UV (underwater vehicle) – they got down to 5,000 meters, the UV tracked along and took recordings of the magnetic field.”

As we made our way through the ship, we also met Kari Anderson, a deckhand on board the Sikuliaq. She’s originally from Seward, and is enthusiastic about her job.

“I get to steer the ship when we’re not in auto-pilot, I run most of the cranes for our fast rescue boats, I have emergency response duties and when we have science parties on board, I help them deploy their equipment, as well,” she said.

Anderson said she loves traveling, and with a biology background, she also appreciates learning from the scientists. 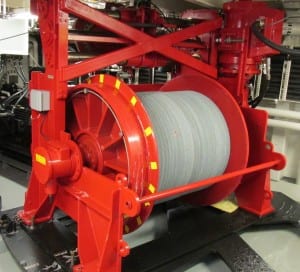 One of the two winches on board the Sikuliaq. They are housed inside the ship, to reduce wear-and-tear.

One of the rooms we visited housed two huge winches. Sound exciting? Well, it is, from an ocean-researcher’s point of view. Seamans explained that the winches – used to haul equipment and/or samples into and out of the ocean — are the “bread and butter” of the ship’s research operations.

“If these winches are working well, we’re in good shape to conduct science,” he said. “If they’re not, it’s a lot of lost time, it’s a lot of expensive equipment you can lose or damage. “

Because of the importance of those winches, the crew has been testing them ever since they took delivery of the vessel. And more sea trials are planned, now that the ship has made it home to Alaska.

“We’ll be going up for ice trials, into the Bering this March,” Seamans said. “So from here, we go up, we do the Sound Range. From the Sound Range, we’re in Seward for three weeks before we head up to do ice trials.”

After that, who knows? The ship’s long-range schedule hasn’t been determined yet, and as a global-class research ship with ice-breaking capabilities, it could take its crew anywhere.

The R/V Sikuliaq is owned by the National Science Foundation, and operated by the UAF School of Fisheries and Ocean Sciences. After Ketchikan, it heads to Juneau before arriving at its home port of Seward.

A view of Deer Mountain, taken from the top deck of the R/V Sikuliaq.