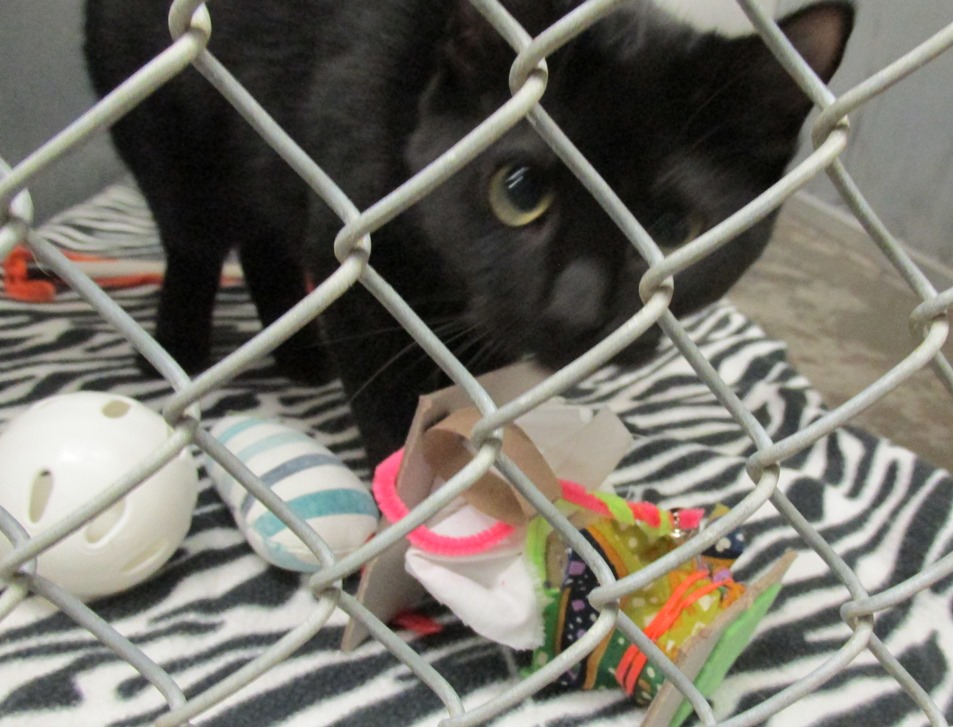 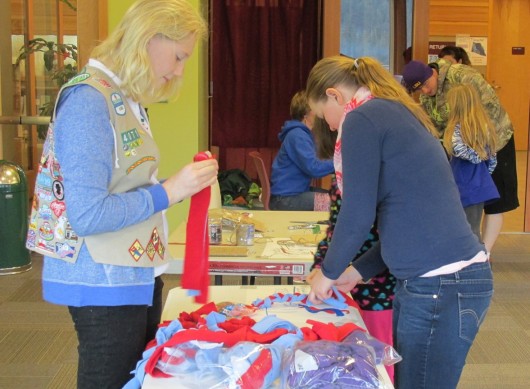 Girl Scout Shaundra Rhodes demonstrates how to make a tug-toy for cats during the community cat-toy-making event organized by her troop.

The toys are the result of the troop members’ Silver Award community service project. That’s the highest award possible for a cadette – a Girl Scout who is in the sixth through eighth grade.

All three members of Troop 4071 are eighth-graders. They had been visiting the shelter to volunteer and help socialize the pets.

Troop Leader Sheila Miller said that during those visits, they learned that the shelter needed toys that are disposable or washable. So, when the girls decided to go for their Silver Award, they chose cat toys.

“Then they looked up cat toys that they could make, made some prototypes, and went back 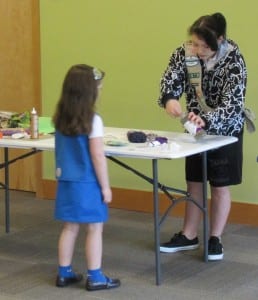 to the shelter to test them out on some cats,” she said.

The prototypes worked, so the three Girl Scouts organized a cat-toy-making party, and invited the community to help. The event was at the Ketchikan Public Library, and each Scout was in charge of specific toys, with supplies organized in plastic tubs, an instruction sheet taped to the table to show how to make the toys, and a demo toy to see what it should look like when complete.

Shaundra Rhodes has been in Girl Scouts since she was a Daisy in Kindergarten. She was in charge of tug-toys and scratch pads, and explains how each is made. 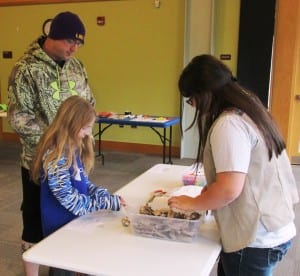 “You grab three strips of fabric and braid them together. So it’s easier – it’s thick. You can grab onto it and play tug of war,” she said. “And then for the scratch pad, all you do is grab some plywood or something and wrap some string on it. It’s like a scratching pad.”

Girl Scout Karri Montero describes another toy that she was helping people make.

Nayomie Welty is the third member of the troop.

“This one, it’s where you take a piece of fabric and put some catnip in the center, just a little bit,” she demonstrated. “And you can tie it with a rubber band and put a little bell on it. Or you can use some yarn. 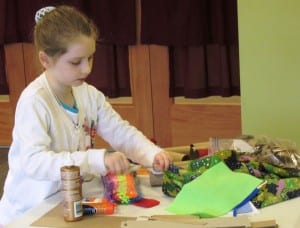 A young girl makes a cat toy for felines at the animal shelter.

“And this side, we have make-your-own, which is basically taking whatever and using your own ideas and making a cat toy yourself.”

All three girls agreed that the project was inspired by a love for animals. Here’s Karri again: “We were thinking about our causes, of what we wanted to do and what was a major

problem. One of the problems that came up is that we like animals, and we want them to get adopted. But we couldn’t really do anything about that. So, we went to the pound and then we figured out something we wanted to do for them, that they needed. They need toys.”

At the shelter, volunteer Lisa Renshaw tried some of the toys out on various cats, and the 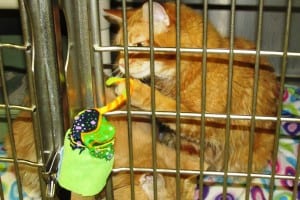 One of the many cats at the Ketchikan Gatgeway Borough Animal Shelter plays with a donated, hand-made cat toy.

cats were happy to play.

Renshaw has volunteered at the shelter since last September. She said that she, other volunteers and staff members appreciate the Girl Scouts’ hard work.

“It’s awesome. It’s so great because the kittens get different types of play and interaction,” she said. “We’re really happy about that.”

Shelter animals that are able to play and interact with people make better pets, so the Girl Scouts’ gift not only benefits the cats now, but helps their future families, as well.