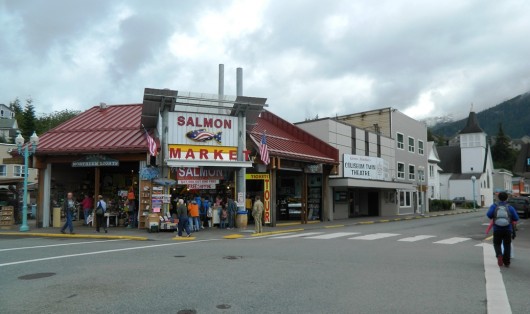 Mission Street in downtown Ketchikan is busy during the summer tour season, with many shops lining the street.

The Ketchikan City Council agreed Thursday to move forward with an ordinance that would restrict hawking by employees of downtown shops.

The Council directed City Attorney Mitch Seaver to draft an ordinance that would make it illegal for people standing outside a downtown business to call out to people walking along the street, if it is an attempt to initiate a commercial transaction.

Susan Peters owns an art gallery downtown and is part of the Downtown Steering Community. She has advocated for limits on hawking for at least a year, and told the Council that it’s become a big problem.

“There’s a real issue, and I think anybody that doesn’t believe it needs to walk downtown and see it,” she said.

Peters says the main problem appears to be store employees standing in the alcoves at the entrances to their stores.

Seaver has researched rules put in place in Juneau and Skagway limiting hawking, but there is a difference in how those communities enforce those rules.

“Juneau has not taken the step of prohibiting someone completely inside their enclosed structure from soliciting someone that’s just passing by,” Seaver said. “Speaking with the chief of police in Skagway, they do view that situation as a violation and do warn and have ticketed some people for that conduct.”

Seaver wanted Council members to provide direction on how limiting they wanted Ketchikan’s ordinance to be, noting that a more restrictive set of rules could be more difficult to defend if it’s challenged in court.

Council members agreed that they preferred Juneau’s less-restrictive regulations, and tentatively suggested a boundary for the new rules from Talbots through Thomas Street, including Creek Street.

Also Thursday, the Council approved a motion to move forward with final design plans for the last phase of the Berths 1 and 2 renovation project, but without a new shelter.

The shelter held up completion of the project last year, when some on the Council were 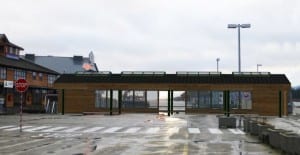 One of the shelter options presented for the Council to consider.

concerned about its effect on the view. Designers went back to the drawing board to come up with options, which were presented to the Council Thursday. Frankly, though, Council members just didn’t like it.

Here’s Council Member DeAnn Karlson: “We do a lot of things on the docks for the tourists, to accommodate them. I think we need to take the community into consideration on this one, because honestly, that is God-awful.”

In other action, the Council approved a resolution supporting the concept of transferring the 17-million-acre Tongass National Forest to state ownership. The action is similar to a resolution approved by the Ketchikan Gateway Borough Assembly this week. Both the city and borough resolutions refer to a failed Tongass Transfer and Transition Act from 1995.

Council Member Dick Coose says it’s time to give it another try. Council Member Matt Olsen disagreed. He says the Tongass Transfer Act never made it out of committee, and that was with a Republican-controlled House and Senate, and a Republican president.

“It’s not going to move forward,” he said. “Our efforts would be much better spent on a

resolution imploring the federal government to speed up the process of making sure Alaska gets the last of the 5-plus million acres that we’ve been granted under statehood that we’ve submitted for approval that hasn’t been awarded to us yet.”

Olsen argued that the city should push for something that the state could actually get. He cast the only dissenting vote on the motion.

At the close of the meeting, City Manager Karl Amylon informed the Council that the Ketchikan Gateway Borough has expressed interest in forming a special committee to deal with issues related to marijuana legalization. The Council supported that idea.