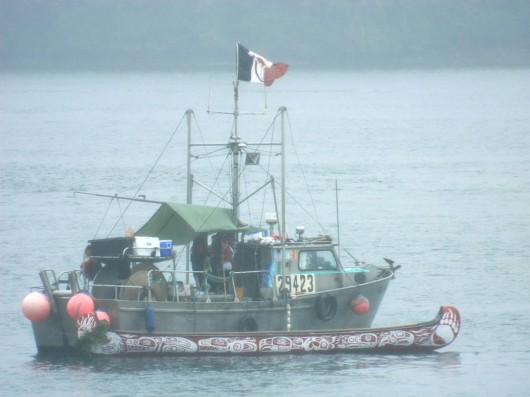 A colorful canoe is towed from Saxman after a group of paddlers landed and disembarked in August 2013.

About two years ago, a group of First Nations and Alaska Native canoeists paddled from Canada’s northwest coast, across the U.S. border to Alaska’s only Indian reservation, on Annette Island.

Now, a group is planning a return journey, paddling the same route back toward the Tsimshian Native community’s roots in British Columbia.

Liwaayda means “pull together” in the Tsimshian language. It’s the name chosen for a new canoe society in Metlakatla, and the meaning is more than just an efficient way to paddle a boat.

For Southeast Alaska Natives, canoe journeys pull everyone together.

William “Joey” Bolton is an artist, dance leader and treasurer of the new Liwaayda Canoe Society.

The canoes are an integral part of our society, going all the way back to when the first guy threw a log in the water and started paddling around,” he said. “Everything revolves around the canoes, the culture, the dancing, the protocol.”

Bolton says many of those protocols have been forgotten, along with other cultural traditions. Through Liwaayda and the upcoming canoe journey, society members hope to start Metlakatla’s youth on another journey: rediscovering their heritage.

“When you leave a village, the people come down and they bless you before you leave, when you come to a village for a potlatch or just visiting, they have protocols, you don’t even step off the canoe until you’re greeted by the person on land,” he said. “Then you say, this is who I am, we come in peace, may we step onto your land? Even though we don’t own the land, it’s where we’re living.”

Where they are living, in Metlakatla, Alaska, is named for Metlakatla, British Columbia. That’s where Annette Island’s First Nations settlers originally came from, and that’s their destination in the upcoming canoe journey.

Bolton says it’s not only Tsimshian people who will paddle. Tlingit and Haida Natives from Southeast Alaska plan to join the journey, along with paddlers from seven villages in British Columbia.

Here’s the plan: They’ll send their canoes to Ketchikan by ferry, and the paddling portion of the expedition will start on Aug. 6 from the Native Village of Saxman. They’ll paddle about four hours to Annette Island, in time to join in the annual Founders Day festivities.

In addition to the canoeists, Metlakatla residents will welcome another special visitor for Founder’s Day. Dayna McKay is a long-distance swimmer, and is a Tsimshian from British Columbia. She swims to raise awareness of cancer, and to inspire Native youth.

Bolton says McKay will start from just over the border, and will swim from Canadian water all the way to Annette Island.

“She said it should take her three days to swim, but she’s allowing herself six days because, unfortunately, during the first week of August, when she’s planning on swimming is our biggest tides of the year,” he said. “Anyone who knows about our tides, that’s some tough swimming.” 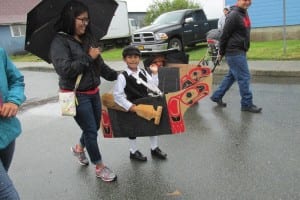 A boy dressed as a Tsimshian pioneer in a canoe for last year’s Founders Day parade in Metlakatla.

McKay is due to land on Annette Island on Aug. 6, the same day that the canoeists arrive. Once all the visitors get there, the festivities can begin, not the least of which will be Founders Day.

That day celebrates the founding of the new Metlakatla, which took place on Aug. 7, 1887.

After Founders Day, the longer canoe journey will begin. Bolton says it will take about two weeks to complete, with paddlers visiting First Nations villages along the way and ending the trip in Metlakatla, British Columbia.

In preparation for the expedition, Liwaada Canoe Society members are helping young participants carve the paddles that will be used for the journey, and they’re all are connecting with elders to make sure they’re following traditions properly, learning the correct greetings and practicing canoe songs.

“Way back when, they had all kinds of different paddling songs,” he said. ”Some were a slower pace when you have a hundred miles to go, then you have the faster songs when you’re passing someone, (or) you’re in the home stretch and you want to make an impression.”

Bolton says the group also is working toward purchasing a fiberglass canoe for this year’s journey, but they have plans for more traditional canoes later on. They’re working on a program through the Annette Island School District, pairing students up with mentors to make 32-foot cedar strip canoes

That will be another way to engage the community’s youth in their rich, cultural traditions.

You can keep up with the Liwaayda Canoe Society and its upcoming events through its website at http://liwaayda.weebly.com/.

The group also has a Facebook page, with regular updates.