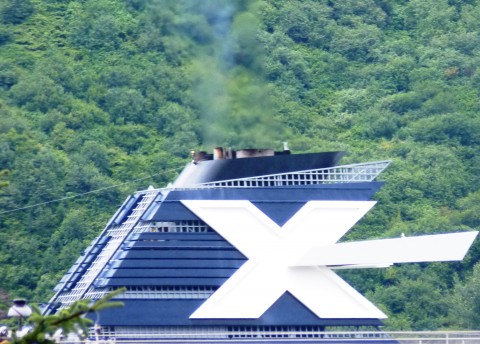 A Celebrity Cruise Line ship sails into Juneau in 2012 with emissions coming out of its stack. New pollution-control equipment being installed on Alaska-bound and other ships will reduce the emissions plume. (Ed Schoenfeld/CoastAlaska News)

The stuff that comes out of cruise ship smokestacks can cloud the air, leaving a haze over port cities, and plumes along their routes.

But it’s more than unsightly. Sulfur dioxide, ash and other ingredients contribute to acid rain and smog. They can also cause respiratory problems — and even death.

That’s why the Environment Protection Agency set new emission standards for most vessels. 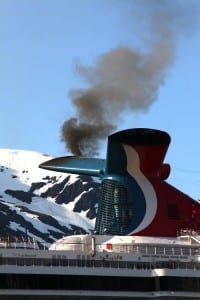 Smoke pours out of the smokestack of the Carnival Spirit as it fires up its engines. (Courtesy Ground Truth Trekking)

That includes almost 30 large cruise ships sailing Alaska waters, some of which are getting new pollution-control equipment.

“One of the ships, which is the Solstice, is being retrofitted right now,” says Rich Pruitt, vice president of environmental stewardship for Royal Caribbean International.

The line will send five ships to Alaska this summer.

He says about 20 of its vessels, close to half its worldwide fleet, are getting new air-emission control equipment, called scrubbers.

“By spraying water into the exhaust stream, the sulfur dioxide and particulates are basically captured in the water spray. And it effectively removes any sulfur dioxide, up to about 98-99 percent, and a significant portion of the particulates,” he says.

Pruitt says the rest of the corporation’s fleet will eventually get the technology, though it may try some other options.

The cruise industry could meet EPA standards, and upcoming international rules, by switching to low-sulfur fuel, which causes far less pollution. But Pruitt says that’s too expensive, and refineries may not make be able to keep up with the demand.

That’s why the industry is installing scrubbers.

“We’re looking at this as a way of ensuring that we’ll be able to be compliant regardless of where we operate,” he says.

Carnival Corporation, which owns Princess and Holland-America lines, announced its intentions in 2013.

“The only other major cruise line that brings ships to Alaska is Norwegian Cruise Lines and they also have a program to start to install scrubbers on their existing ships,” says John Binkley, president of the Alaska chapter of the Cruise Lines International Association.

The new federal rules, which mirror those in Canada, are for lines sailing within 200 miles of the coast. They took effect in January, but Binkley says many ships were not ready.

“Each company has negotiated with the EPA, the Environmental Protection Agency, on a schedule and when they’re going to bring certain ships into compliance,” he says.

Critics say the lines should have been ready sooner.

Chip Thoma campaigned for a tax-and-pollution-control initiative voters approved about 10 years ago.

“The cruise lines fought that tooth and nail in the State Department, and every chance they’d get in Washington, D.C., to try to scuttle that treaty,” he says.

He’s encouraged by plans for new scrubber technology. But he says the lines should also switch to low-sulfur diesel.

“I think the price of fuel, all fuel, is going to keep going down. And it’s eventually going to be in everybody’s best interests to just burn clean fuel,” he says.

Some critics say scrubbers only change air pollution into ocean pollution, since the filtering water is disposed of overboard. Pruitt says Royal Caribbean ships, which include the Celebrity line, will treat the water and dispose of the resulting sludge on land.

Similar technology is used on other large ocean-going ships and coal-fired power plants.

Alaska does not regulate the chemical composition of cruise-ship air emissions. But it does measure its density.

“The assumption is that as the amount of sulfur in the fuel decreases, the opacity would as well. We don’t have any requirements for the equipment used or anything like that. So we’re not directly involved with the scrubbers. But once it goes overboard, we’ll be monitoring that,” he says.

Some lines won’t discuss what they’re spending. But Carnival has said installation on 70 of its ships would cost about $400 million, or around $6 million each.

“By having the exhaust gas cleaning systems or scrubbers, it will allow us to burn the more affordable fuel. So, it’s not like we feel that we have to pass that on,” he says.

While EPA rules kicked in this year, worldwide standards won’t take effect until 2020. They’re less stringent, but are still a significant reduction.