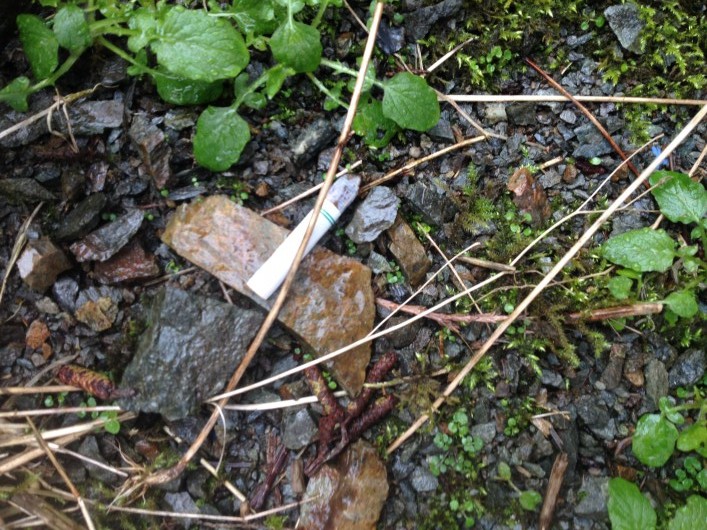 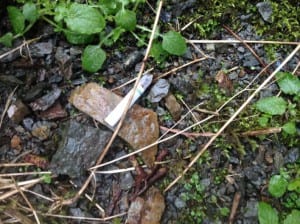 A cigarette butt on the PeaceHealth campus March 18, 2015.

It’s not often kids are asked to kick butts, but this week they were. In Ketchikan and across the country, teens participated in the national “Kick Butts Day,” part of a campaign for tobacco-free kids.


On Wednesday a group of about 30 kids and a few adults gathered for national ‘Kick Butts Day’ in the PeaceHealth hospital parking garage. It was the biggest event of the week, which included other cigarette butt and trash cleanups at the airport and Walker field.

Huddled in the parking garage, kids grabbed trash bags and latex gloves. As soon as the gloves were on the surgeon imitations began. Stretching out the glove and letting go with a snap. 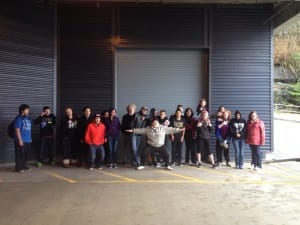 Volunteers gather for “Kick Butts Day” in Ketchikan on March 18, 2015.

“Can I have your attention over here, please.”Liberty Johnson is the Health Educator for Ketchikan Wellness Coalition. She focused the teens and gave instructions.“This is how it’s going to go you guys. If you’ve got a white bag, that is all tobacco products are going to be put in there. Butts, lighters, everything, empty packs of cigarettes, you put into the white bag, that’s all that goes into the white bags. All rest of the trash you see will go into the black bags.”

Black and white bags in hand, the teens broke into groups and headed out of the parking lot shelter into the rain, splitting into teams to cover the entire hospital campus.
About 20 of the kids came with Residential Youth Care. Others came with Ketchikan Youth Court, Ketchikan Youth Initiatives, and some came by themselves. High schooler Matthew Carteeti, who was out of school this week for spring break, says his dad told him about the event, and thought it was better than playing video games.

Carteeti teamed up with two other boys and headed to upper level parking. 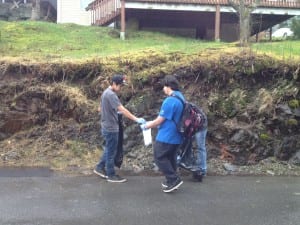 Ketchikan Medical Center declared itself a smoke-free campus in 2005, but there were plenty of soggy cigarette butts to be found. After sitting out for possibly months in the rain, the butts were no longer perfect cylinders, but still easily recognizable. The white fibers that make up most filters look like cotton, but they are actually cellulose acetate, a plastic which will hold its form for a long time. Carteeti picks one up. “Either way you can see the filter, you can see the brand on there a little bit.” Marlboro is written in small gold lettering. He puts it in the white bag.

Before the tobacco products in the white bags end up in the trash, Liberty Johnson will count each butt individually. She’ll also keep track of where the butts came from and if there is any visible brand indication. She says she’s looking forward to the dirty job and what the data might reveal.

According to a survey by the Centers for Disease Control and Prevention 10.6% of Alaska high school students smoke and, 600 kids become new daily smokers each year.

Katie Parrott, director of program development at Residential Youth Care, says the anti-tobacco message was why almost all of RYC youth was involved with the cleanup.“That’s one of the things we push in our programs. You know, you live a substance-free life that includes tobacco, and so this was just something that we thought we could be a part of and doing some good in the community. “

Looking at the contents of his white bag after an hour cleaning up, Carteeti squints his face in disgust. “There’s so many different kinds of cigarette butts in here actually, I don’t know why people smoke, but eh.” He says now that he’s spent time intentionally looking for them, he’ll probably notice butts on the street more often. 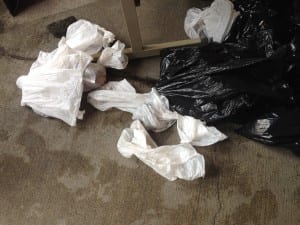 *We were not able to capture the sound of latex gloves at the event, and the sound used was recreated.