B.C. OKs another mine near AK border 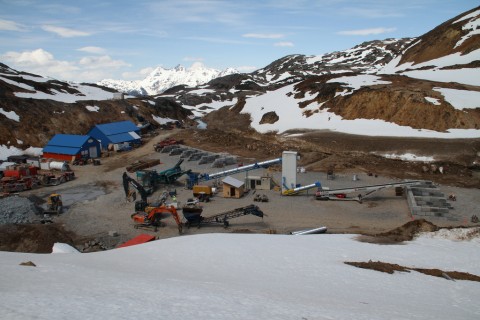 The Brucejack mine site is shown in this 2013 photo. British Columbia officials recently issued an environmental certificate that’s an important part of the permitting process. (Courtesy Pretivm Resources)

Another gold mine upstream from Southeast Alaska is a step closer to opening. British Columbia recently granted provisional environmental approval to the Brucejack project.

It’s much smaller than some other transboundary mining projects. But critics say they still have concerns.

The Brucejack mine site is about 25 miles from the Alaska border and about 85 miles east of Wrangell. It’s within the watershed of the Unuk River, which drains into the ocean northeast of Ketchikan. It’s adjacent to the KSM, one of the most controversial transboundary mining projects. But it’s much smaller and won’t use a tailings dam.

Romero says the high concentration of gold negates the need for open-pit operations. It also reduces the amount of tailings, the waste rock left over after processing. A heavy equipment operater moves a drill into position in a Brucejack Mine tunnel. (Courtesy Pretivm Resources)

About half those tailings will be used to backfill mine tunnels. The other half will be placed into nearby Brucejack Lake.

“There’s no tailings dam. Nothing that can fail because we are using an existing, natural lake,” she says.

Romero says the lake is frozen much of the year because of its high elevation. Environmental documents show it has no fish.

The provincial permit, awarded March 26, is not the final step in government review.

“The B.C. environmental assessment certificate was certainly a major milestone for us. And we will wait for the federal permits and that will enable us to begin construction,” she says.

Brucejack’s owners say that will take two years and $750 million, Canadian. Zijin Mining Group of China recently bought into the project, though further financing is needed.

Brucejack is uphill from the Kerr-Sulphurets-Mitchell project, a lower-grade, multi-metal mine owned by Toronto-Based Seabridge Gold.

Critics of B.C. mines near transboundary rivers say the much larger KSM has the potential to pollute watersheds of two rivers that reach the ocean within 50 miles of Ketchikan — the Unuk and the Nass.

“This clearly isn’t a mine the size of KSM or with the type of tailings dams and the amount of tailings,” says Chris Zimmer, Alaska campaign director for Rivers Without Borders.

He says British Columbia is approving too many mines, much too fast, without enough consideration of salmon in those rivers.

“We still don’t see safeguards to protect our interests downstream and B.C. is just rubber-stamping these mine proposals as fast as they can here,” he says.

“When asked about dry stacking, an alternative to submerging tailings in water, the owners of Brucejack said it would be just too expensive to do that. That seems to contradict the Mount Polley report, which is alarming,” he says. “That’s intended to be followed to a T and already, a month and a half after it’s been released, we’re seeing mines that aren’t following those recommendations.”

The KSM has already been approved by federal and provincial environmental agencies in Canada.

And B.C.’s government recently OK’d limited operations at the Red Chris Mine. It’s on a tributary of the Stikine River, which enters the ocean near Petersburg and Wrangell.

SEACC, Rivers Without Borders and other Alaska groups are pushing for the projects to go before a U.S.-Canada panel that reviews cross-border water issues.

An earlier attempt to develop Brucejack failed, in part due to low gold prices.