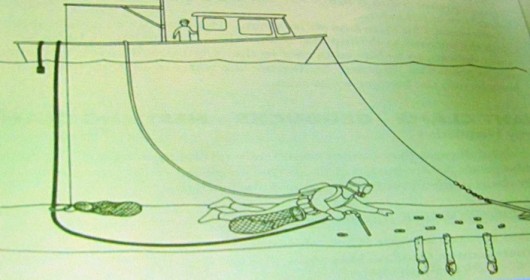 A slide from Phil Doherty’s presentation shows a drawing of a diver harvesting geoduck clams. The clams bury themselves in the ocean floor, with their long necks sticking up to feed.

Southeast Alaska’s dive fisheries are a $15 million industry that operates in what is generally a slow time for other regional commercial fishing. Fishermen who hold dive permits agreed years ago to pay a tax to fund the Alaska Department of Fish and Game’s management of the limited-entry fishery. The tax also pays for PSP, water quality and, now, arsenic testing, all run by the Southeast Alaska Regional Dive Fisheries Association.

During a presentation this week to the Ketchikan Chamber of Commerce, SARDFA Executive Director Phil Doherty touched on some of the challenges the industry faces, such as new testing demands from mainland China, and the bane of shellfish fishermen: Sea otters.

SARDFA’s Phil Doherty told the chamber audience that there are 398 permits for sea cucumbers alone, and that fishery brings in about $6 million a year.

“They’re kind of ugly, but they’re very valued for their meat,” he said. “And it’s almost all, if not all, Oriental market. The cucumber goes to a number of countries, Japan, Korea, China. Those are probably the three main countries.”

The Asian market is the primary destination for all three of Southeast’s dive fishery products. Geoducks are shipped live within a day or two of harvest, and sea urchins are prized for their roe, which is removed prior to shipping.

The urchin fishery, though, has been in decline, and there are now only about 84 permit holders for that fishery. Of those, about six are active.

Doherty said part of the problem is that the roe is delicate. Packing it so that the roe arrives at the Asian market intact is challenging and expensive.

“It’s very labor intensive,” he said. “As you crack the urchin open, you have to have all the spines out, you have to have a good-looking product. It was difficult for the processors to figure out how quite to do it. And then, there was a huge influx of Russian sea urchins on the market.”

Another reason is sea otter predation, but we’ll get into that a little later.

About 112 permits are out there for the Southeast geoduck fishery, which brings in $6 million a year. While it’s lucrative, it’s also expensive. Doherty said SARDFA spends a lot of money on various tests related to geoducks.

For example: PSP or Paralytic Shellfish Poisoning, which can be found in clams and other shellfish that have been exposed to certain algae. It’s potentially deadly, so testing is required before a bed of geoducks can be commercially harvested. Water quality testing also is required, and, now, inorganic arsenic.

That’s a new, expensive, test that the Chinese government decided, rather suddenly last year, to require for geoducks from Washington State and Alaska. And, since mainland China is the primary market for geoduck clams, they’ve gotta do it.

“We have to go to all the beds, and we’re talking about very, very, limited amounts of inorganic arsenic, nothing that anyone would ever worry about,” he said. “There’s a lot more inorganic arsenic in the rice that they eat in China than anything they would ever eat in a geoduck.”

Doherty said the Southeast Alaska dive fisheries will survive all the regulatory requirements, even if they are expensive and don’t always make sense.

What will kill the shellfish industry, he said, is the rapidly increasing population of cute, fuzzy, federally protected sea otters.

Doherty said sea otters were wiped out in Southeast during Russian control of the area. In the 1960s and ‘70s, they were reintroduced. They slowly rebounded for a few decades, but then the population boomed.

The effect on a sea urchin fishery near Sitka has been the most dramatic, so far.

“They harvested about 300,000 pounds one fall and they were getting geared up to go back the next spring, and there wasn’t a sea urchin left,” he said. “The otters had moved in.” 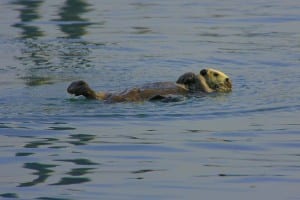 SARDFA hired an Alaska research company, the McDowell Group, to conduct a study on sea otters and their effect on shellfish. Doherty said the results were conclusive.

“Basically, what they said is, where there’s sea otters, there’s no commercial shellfish fisheries,” he said. “That’s the give and take. We have sea otters in Southeast, we won’t have Dungeness (crab) fisheries, geoduck fisheries, the $15 million dive fisheries will go away.”

Otters are protected by federal regulations, so fishermen can’t legally shoot or trap their furry competition.

The only people allowed to hunt sea otters are coastal Alaska Natives. And they’re not allowed to sell otter pelts unless the fur has been altered using traditional handicraft methods.

There has been some effort at the state level to relax those rules, with no success. There also has been an effort to train more Alaska Natives in handicraft methods using otter fur.

Doherty said more otters have been killed in recent years than previously, but it’s not keeping up with the population growth.