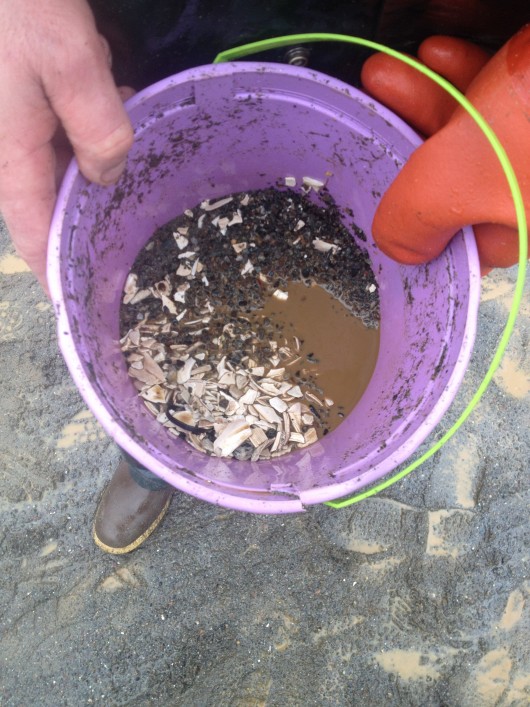 Shells picked from the surface of Dudley field Thursday April 9, 2015.

The Ketchikan High School girls softball team has its home opener this weekend against Juneau-Douglas, and although they will play in Ketchikan it won’t be exactly home.

Softball head coach Scott Smith is disappointed that Dudley Field, which Kayhi calls home, won’t be ready for the home game. But it may be even longer than initially thought after pieces of seashells were found on the field’s surface.

Early Thursday morning, about half a dozen Borough Parks and Recreation employees were at Dudley field in a downpour, picking up seashells,  including Public Works Director Alex Peura.“We kind of made the call in public works to do due diligence and help out and see if we can open this field. If we were to do nothing then we basically shut the field down for the season.” 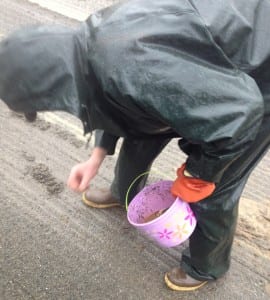 Dudley field, adjacent to Kayhi, had been overdue for a resurfacing, said Kayhi Athletic Director Ed Klein. After long and heavy rains, the field would develop big ruts, which were so big, the field was unusable.  The Ketchikan Gateway Borough, the field owners, budgeted this year to have it completely resurfaced, along with the Houghtaling Elementary field.

The contractor, Ketchikan Ready-Mix, began by scraping six inches off the field. Then, imported material from Prince of Wales was laid down, but it wasn’t enough. So, the contractor used some of the original material to supplement.

The shells are not new. They came to the field in dredge material from Bar Harbor that was placed underthe surface in the late 1990s. It wasn’t noticeable at first that the material had shells, not until the final compaction. “ And then when he compacted it with a big roller compactor it brought all the shells up to the surface, and then it became noticeable hey there’s a lot of shells in this surface material.” 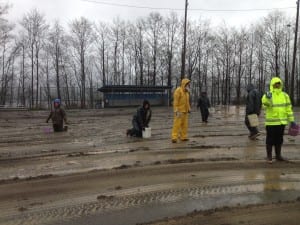 Peura said that, because of the wet weather, the field material was soupy and fluid, allowing many shells near the top to float to the surface.

Coach Smith said the shells, some sharp and as big as two inches, are a safety concern. “Baseball and softball are not games that are played on top of the surface, they are often played in the surface. Diving and sliding is part of the game it’s not something that can be avoided. So, ending up with sharp objects of any kind in the skin is not something any of us want, obviously.”

Since Dudley field has been unusable during the renovation, the girls already had been displaced to Norman Walker field at the middle school, and that means others have been displaced, including 29 Little League teams.

“We’ve gone from having access to really five fields to one.It’s going to quickly bottle neck. There’s just not enough fields to accommodate everybody if we don’t have those two surfaces, Houghtling and Dudley.”

Smith said it’s an unfortunate situation, especially for seniors who have been looking forward to this season their entire young softball careers, but it won’t stop them from playing. “We’re going to find a way to make Norman Walker our home until we have somewhere else to go.”

Ketchikan Ready-Mix under contract has until April 15th to have the field ready. After the opener, the next softball home game is in May.