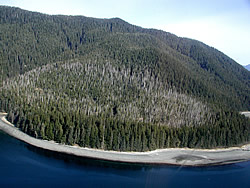 Based on a petition submitted about a year ago by a coalition of conservation groups, the U.S. Fish and Wildlife Service announced last week that protection for the Alaska yellow cedar tree might be warranted under the federal Endangered Species Act.

Yellow cedar is a popular commercial wood, and among the three tree species commonly harvested in the Tongass National Forest, it’s the most lucrative. If the tree becomes a protected species, though, all that would change.

The petitioners calling for federal protection of the Alaska Yellow Cedar are the Center for Biological Diversity, The Boat Company, Greater Southeast Alaska Conservation Community and Greenpeace. In their lengthy petition, they argue that yellow cedar has “precipitously declined” over the past 30 years due to global warming and climate change.

The petition notes that the timing and frequency of freeze-thaw cycles in early spring, and reduced snow cover, cause injuries to the shallow root system of the yellow cedar, and those injuries can cause a tree’s death.

Owen Graham of the Ketchikan-based Alaska Forest Association disagrees with the petition’s arguments about global warming causing a decline in yellow cedar.

“It has affected a very small portion of the Tongass over the past 100 years,” he said. “And the bulk of the decline has occurred on the non-commercial timberland.”

The petition cites studies that show more than 70 percent of Southeast Alaska yellow cedar trees in affected stands have died.  Those affected stands are found on about 500,000 acres of forest, on sites from sea level to an elevation of about 300 meters, according to the petition.

The Tongass National Forest has about 17 million acres, including forest, wetlands and alpine.

The petition argues that the yellow cedar must be listed for protection to maintain existing stands from what petitioners call the overutilization of the species. Logging, in particular, is noted, because yellow cedar is targeted for its high value.

Graham said logging of any tree species on the Tongass will become complicated if yellow cedar is protected.

The petition notes that active management will not succeed unless there’s also a drastic reduction in global greenhouse gas emissions, to slow climate change; as well as an immediate end to all logging of yellow cedar.

Following the announcement that listing might be warranted, Fish and Wildlife will conduct its own status review of the petition’s claims regarding protection of the yellow cedar, with a finding expected by June 24. Additional information will be gathered for a year after that before a final decision is announced.