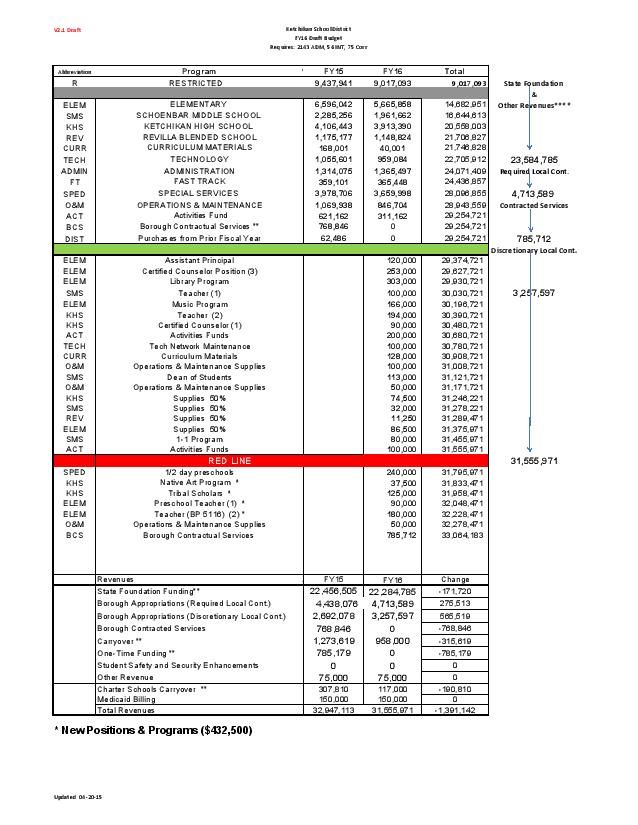 The Ketchikan School Board approved a staff over stuff priority budget during  its Wednesday night meeting. The budget is similar to last year’s but there are some changes.

The School Board approved an approximately 31 million dollar budget for the 2016 fiscal year.  Superintendent Robert Boyle will present the budget to the Ketchikan Gateway Borough prior to May 1st and ask the borough to contribute 7.9 million dollars.

In addition, the district will ask the borough to fund contracted services, such as the use of Dudley Field, which is borough owned.  Board Member Stephen Bradford asked that contracted services be separate from the operating budget. Board Member David Timmerman agreed saying the way it is now seems strange and he offered an analogy.

“I have a daughter and if I pay her ten bucks a week for allowance, but I don’t let her use the yard unless she pays me ten bucks a week. It’s kind of like that.“He said taking contracted services out of the budget is more transparent and shows better what money the district receives from the Borough.

If the district does receive the $7.9 million dollars from the borough, no positions would be lost.  The district wouldn’t fund any new programs or positions, and operations and maintenance supplies would lose $50,000. In addition, the preschool will have two voluntarily vacated positions, which will not be filled, and the preschool model would shift. Superintendent Boyle said  “what we’re going to do is a half day preschool and we’re going to try to arrange it in a way that allows our special needs students to stay all day. ”

He saids, that next year with four teachers teaching two half-day preschool classes instead of six full-day classes, there will be more space for students, even with fewer teachers.  The district is required to provide preschool services to students with disabilities beginning at 3 years old.

The Board also approved a one-year extension to Superintendent Boyle’s contract.

The next regularly scheduled School Board meeting is May 6th.