Student : You can climb the mountain, too 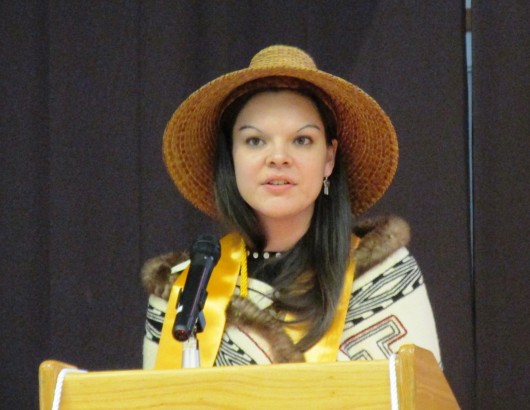 University of Alaska Southeast Ketchikan Campus celebrated its 2015 graduates this weekend. One graduate chosen to give the student address started it with her indigenous language.

Starla Agoney received her degree in elementary education in full regalia, with her graduate’s tassel pinned to a traditional woven cedar-bark hat.

And when she gave her commencement address, she began in Haida. 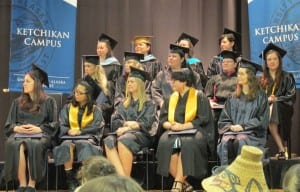 “Starla’s instructors will all tell you she’s raised the level of academic discussion in their classes, challenging both herself and her classmates to get more from their student experiences,” Schulte said.

In her speech to fellow graduates, Agoney used an example of climbing Ketchikan’s iconic Deer Mountain to illustrate the challenge of making it through a college program.

“It had been on my to-do list for a long time. But for 32 years, other things took higher priority,” she said. “It wasn’t that I didn’t want to climb the mountain, but I didn’t have the confidence that I could make it to the top.” 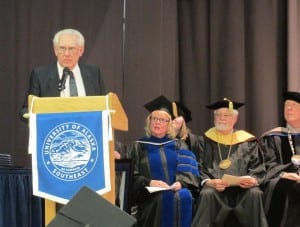 Agoney said family and friends helped by setting small goals along the way, and taking breaks as needed. The last push was the most difficult, but accomplishing that goal felt great at the end. Agoney says she knew then that she could make other dreams come true.

“I had never thought about going to college. I was married and a mother by age of 19. And it seemed impossible to be anything more than a mother and a wife,” she said. “I hadn’t even graduated from high school.”

Her husband encouraged Agoney to go through a GED program, and later, she says, she found herself enrolling at UAS, giving herself another mountain to climb.

Like with Deer Mountain, Agoney says she made it with the encouragement of family and friends. And she’s not alone – the other graduates climbed along with her.

“We’re at the top of the mountain,” she said. “And we’re calling to everyone who has the dream of a college education: ‘We’re here. You can do it.’” 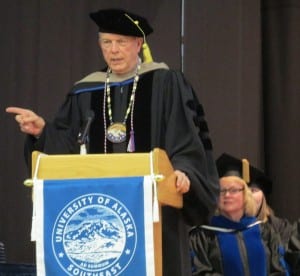 UA President Patrick Gamble was one of the speakers during Saturday’s graduation.

recognizing her as one of this year’s outstanding Southeast graduates.