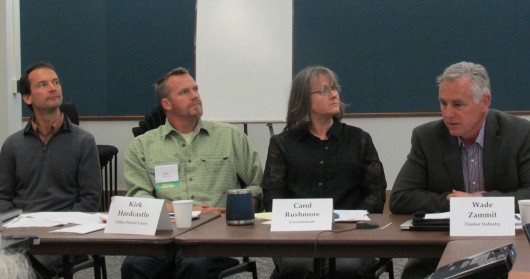 Tongass Advisory Committee members discuss recommendations for transitioning to second-growth timber during Day 2 of the three-day meeting in Ketchikan.

The Tongass Advisory Committee kicked off day 2 of its three-day meeting in Ketchikan Thursday with more than an hour of public comment. That input was consistently negative. But some committee members took that as a good sign.

For example, here’s Dick Coose, former district ranger for the Ketchikan Ranger District. He says there isn’t enough second-growth yet to transition now, it’s happening too fast, and the Committee should just say no.

“Quite frankly, this is a million-dollar-plus waste of time” he said. “The Forest Service has demonstrated scientifically that trying to convert to quickly is not the right way to do it.”

And here’s Buck Lindekugel of the Southeast Alaska Conservation Council. He says

environmental groups like his have submitted their own set of recommendations that would lead to a faster transition to young growth, to save remaining old stands from logging.

“Only 4 percent of the forest is the big old trees that have the most benefit to wildlife and to fish and to timber,” he said. “Unfortunately, when logging started, those biggest, most accessible trees on the flattest grounds, were targeted first. As a result of that high-grading, we don’t have the same options today that we had back then.”

What they’re looking for is a set of recommendations for the U.S. Forest Service to transition away from old-growth timber harvest, replacing it with second-growth.

Committee Member Brian McNitt represents conservation interests. He says the fact that people are uncomfortable means there’s a realization that change is going to happen. But, he says, change is needed.

“I guess my thought is, when I hear all the ‘nos,’ that to me means, ‘I want to leave things the same.’ My question is, ‘How’s that been working for you?’” he said.

After public comment, the committee got into some details of their draft set of recommendations. There were areas where they all pretty much agree, such as transitioning to second growth within 15 years, and using a one-to-one replacement ratio during that transition.

Then there were areas with less agreement. A bullet point regarding five-year goals was a big discussion point, and showed where some on the committee were uncomfortable, just like the people who testified earlier.

The proposal was for the Forest Service to map out and start planning potential old-growth sales while starting the preliminary work for second-growth. The idea is that what’s potentially available during the transition will then be known, giving the timber industry some reassurance. After five years, the focus would switch and the true transition would begin.

Conservationists on the committee are a little worried about continued old-growth logging. Timber reps are equally nervous about what they say is a “hard stop date” for old-growth.

Here’s Eric Nichols, a timber industry representative: “You’re saying that year five, we’re going to look back and see if our young growth is anywhere close. But also year five, we can’t plan any more old growth. So, at some point, you’re planning process is gone, and now you’re saying, ‘We don’t have any young growth. What are we going to do now?’”

McNitt pointed out that conservationists on the committee were recommending that the Forest Service devote resources to planning old-growth timber harvests. That’s not a comfortable place for them, either.

“It’s that uncomfortable space in the middle that sometime, like all this, you have to get to,” he said.

And that uncomfortable space, where everyone feels a little insecure, seems to be where the committee is headed.

Update: The committee continued discussing its recommendations through Thursday afternoon. A vote is possible Friday morning.