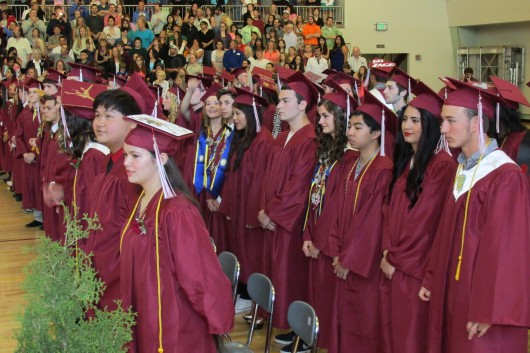 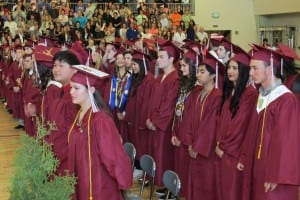 Smiles and cheers graced the Kayhi Gym as more than 130 students were honored Sunday during Ketchikan High School’s 2015 commencement ceremony.

As the Kayhi Wind Ensemble played Edward Elgar’s “Fanfare and Processional”, graduating seniors walked double-file into the Clarke Cochrane gymnasium, most beaming, to receive their diplomas.

Class President Cassandra Adams acknowledged class accomplishments over the past year. She also noted the way classmates have matured and changed since freshman year.

“When I graduate today, I won’t become the rock star I once dreamed of being. When we receive our diplomas, we won’t be the biologists, engineers, teachers and mechanics that we aspire to be. But when we walk down this red carpet today, we will display the maturity, grace and knowledge that we have acquired over the last four years. We haven’t achieved our goals yet or reached our highest dreams, but we have grown up.”

Graduating senior Duncan Menzies  was featured in piece played by the Wind Ensemble called “The Typewriter.”

Former Ketchikan Daily News photographer Hall Anderson provided the commencement speech. Saying he doesn’t know what he’d do without a camera, he brought one with him, along with a strip of developed film. He spoke about his past 30 years covering life and events around Ketchikan. 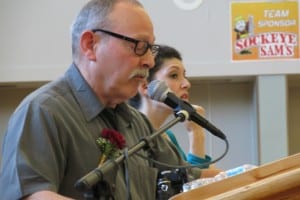 He says addressing the seniors seemed a fitting end to his career at the newspaper as many of the photos he’s taken likely contained Kayhi graduates.

“I calculated how many rolls of film I actually averaged back in the film days. (Holding up a roll of film) This is what film looks like in case you’ve never seen it (Laughter). I shot well over a thousand rolls of film a year. The eventual switch to digital made it so much faster to motor through images that a conservative estimate of the number of images I have taken at the paper is 1,080,000.”

Anderson brought his first camera with him, a 1969 Nikon. He encouraged the graduates to follow their passion.

“My cameras started with this one. It gave me the chance to pursue and develop my vision of the world and give something back to the community. I haven’t gotten rich by any means, but being fulfilled is more important to me than a fat bank account. I learned that you have to follow your heart and your dreams and even though you may have hiccups now and then, life will work out.”

He also offered this advice. 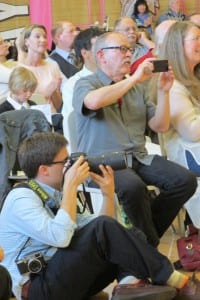 “My advice to you, class of 2015, is to try and make the world a better place as you pursue your individual journeys. Think of the features of the camera. We use the view finder to select what we see in the world. You use the lens to focus on what you believe is most important, and through this process you develop and discover passions that you decide to pursue during your life’s adventure. Stay focused, stay positive, stay true to yourself and remember your journey is just beginning. Never give up. One more thing…I think it’s time for a picture.” (Takes photo)

Before the presentation of diplomas, School Superintendent Robert Boyle asked Kayhi Principal Sam Nelson if students had met all of the qualifications necessary for graduation.  Nelson gave a thumbs up.

The name of each graduate was read to applause and cheers.  School Board President Michelle O’Brien and several faculty members presented awards and diplomas.

Graduates toss their caps at the end of the ceremony

Tassels were then turned, and the Kayhi class of 2015 officially started a new chapter in their lives.