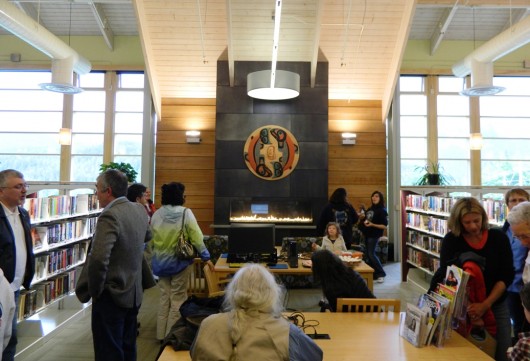 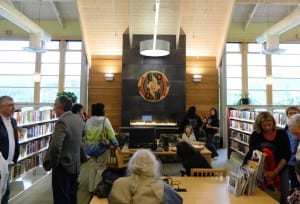 The Ketchikan Public Library is seen during an art unveiling ceremony.

The Borough’s contribution toward funding of the Ketchikan Public Library led to lively discussion at Monday night’s Assembly meeting. A portion of the Borough’s non-area wide tax is used to help fund the city-owned library. The topic came up when 2015 tax rates were discussed. The only proposed change to mill rates was a 0.6 increase for the South Tongass Service Area.

Before considering the main motion, Assembly Member Glen Thompson introduced an amendment to eliminate the non-area wide tax. That motion passed 6-1 with Assembly Member Bill Rotecki voting against the amendment.

Assembly Member Mike Painter asked if this was similar to a resolution passed last year that eliminated the Borough’s contribution to library funding. The Assembly later restored those funds after public outcry.

Borough Manager Dan Bockhorst says this is a similar resolution. He says the library is a non-area wide service and can only be funded with non-area wide funds.

After some discussion, the Assembly voted to reconsider the amendment to eliminate the tax.  Thompson, and Assembly Members Jim Van Horn and John Harrington voted against reconsideration.

Painter says he is not happy with the location or size of the facility. He says the Borough is being asked to contribute funds without any say over the library’s operation.

“They expend and additional $100,000 so they’ll be open on Sunday.  And, my personal belief, I think the library in some views has changed over the years from a quiet place to check out a book and read and do research, to babysitting daycare with all kinds of programs going on.”

Painter says if the fund is eliminated, the public will be back before the Assembly.

Assembly Member Bill Rotecki suggested the Borough consider taking over library powers if it wants control over operations. He says if the Assembly is considering cutting the budget, it’s something that should be discussed with the City first.

Currently the Borough provides approximately $400,000 in non-area wide tax funding to the City of Ketchikan. The City uses that funding for library services. Harrington asked Bockhorst what would happen if the Borough provided no funding or reduced funding.

“It is where it is. It’s not going anywhere. I’m past all that. It’s not going to move to Shoreline Drive. With little of conversation to defund, and that’s really what we’re speaking of, I’m probably going to be voting against this.”

“Mister Bailey said it wasn’t going anywhere, but it is. It’s on a floating slab and it is going.”

The library is located on Copper Ridge Lane and built on fill.

The Assembly voted again on the motion to eliminate a non-area wide tax. This time it failed 6-1 with Harrington voting in favor.

The main motion establishing the 2015 mill rates passed 5-2 with Bailey and Thompson voting against the motion.

Also Monday night, after rejecting an amendment that would have added an aesthetics requirement as a provision of conditional use permits, the Assembly approved in second reading a rezoning request allowing mobile buildings in the City of Saxman.

In other business, the Assembly passed a resolution supporting the repeal of the Cadillac Tax Provision in the Affordable Care Act. Thompson voted against the motion.

The Assembly also passed a resolution opposing listing the Alexander Archipelago Wolf under the Endangered Species Act. Rotecki voted against the motion.

The Assembly decided to keep 5:30 pm as the start time of its regular meetings. Thompson proposed a 7:00 pm start time to allow people time to get dinner.