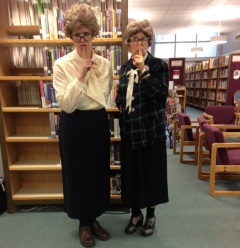 This past year the Ketchikan School District Library curriculum underwent its first formal review since 1984. The updated curriculum was discussed among other topics at Wednesday night’s School Board meeting.

A lot has changed at the library over the last 30 years, and school libraries have evolved, but the paper trail wasn’t kept up. Ketchikan High School librarian CaitlinJacobson said when starting the curriculum review, she read through the 1984 handbook. “But since it was so old there wasn’t really a whole lot of point in looking at it much at all. The basic reference outline is the same, but everything else, how we do things is so different.”

Curriculum Director Shannon Sines, who is in her first year in the position, said she assumes that because the library is not a credit course, it had been overlooked for a formal update. All subjects are on a six-year review cycle.

World Language and English Language Arts also were reviewed over the course of this last  school year.  Kayhi teacher Rebecca Bowlen estimated that for the high school level, the review took 500 hours. Those hours started with understanding Alaska’s new state standards, then making sure the Ketchikan curriculum met or exceeded those, and lastly ensuring the students had learning materials that supported the standards.

Before buying the newest edition of English instruction materials, Bowlen compared it to the material already in use. “It’s the exact same book with the stories and the non-fiction and all of it just re-ordered, so it fits the content rich literary non-fiction.”

A stronger emphasis on non-fiction is one of the curriculum updates prescribed by the Alaska Department of Education and Early Development. Since the current books are the same in content, the District won’t purchase new materials.

Board Member Stephen Bradford asked whether the new standards said anything about penmanship.

“Our standards address handwriting in two grade levels. In Kindergarten students are to be able to write most of their letters in print, capital and lower case. In first-grade they are to be able to print all of their letters, upper and lower case. Handwriting is never mentioned beyond.” Sines said Ketchikan added some local expectations that went beyond those state requirements, but said the state standards and state testing have emphasized keyboarding skills.

No changes were made to the World Languages curriculum. Up for review next year is math.

The Board approved a contract for carpet installation, and for installation of an emergency generator at Ketchikan High School.

The generator, which would allow Kayhi to function as an emergency shelter, is a combined effort with the Ketchikan Gateway Borough. The Board discussed its relationship with the Borough, which was described by members as stressful, especially regarding the issue of contracted services.

Superintendent Robert Boyle shared insight from DEED on the issue “We are to treat contracted services with the Borough as though they were any other contractor in the community or elsewhere. That requires me to question charges. “

Borough fees for field and pool use have come under question lately, the School Board suggesting it is charged above a fair market value for those services.

Board Member Glenn Brown  suggested a casual meeting might help end the friction.  “There’s a formality to the liaison committee meeting that might inhibit the ability to find solutions.” Historically, the liaison meeting was a casual lunch between members of both bodies, and Brown said a return to that might help.