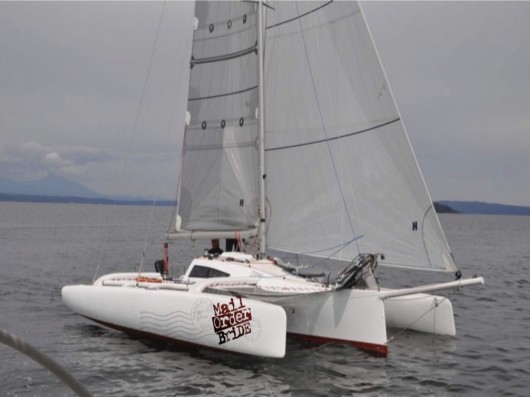 It was a battle for second place in the Race to Alaska, with two teams fighting each other and the weather, as calm winds forced them to row to the finish line early Monday morning.

They were so far ahead right from the start that, barring an accident, it was pretty clear they would win. Not so much for second place, though.

Team Por Favor had been in second for much of the race, but near the end, team MOB Mentality passed and won the coveted second-place prize — a set of steak knives – just four minutes ahead of Por Favor.

Team MOB had a trimaran race boat, so they could afford to stop a few times along the 750-mile route. Por Favor never stopped, and race coordinator Jake Beattie said that’s why they stayed in second for so long.

“Por Favor is on a Hobie 30. It’s an everyman’s boat – a regular-looking sailboat,” he said. “And they just kept sailing through some of the worst weather that anyone’s ever experienced on this route. And they lost it by four minutes. So close. So close.”

The next group of boats now vying for the fourth-place spot are Free Bird, Kohara and Uncruise.

Depending on what the wind does, those boats could start arriving within the next couple of days.

Looking at the race tracker, there are some boats barely past the starting point. Beattie said he predicts some won’t make it to Ketchikan, at least not by the official July 4th deadline. A few experienced equipment or weather delays, and others are just having fun.

“I know a few teams hit a pub night in Lasqueti Island the other night,” he said. “They did pretty well in the trivia, but it doesn’t help your time to Ketchikan.”

Right now, the last-place team shown on the online tracker is Team Puffin, but they are within sight of Team Sea Runners.

A community party for the teams that have made it in so far is planned for 7 p.m. Monday at the Fish House. The event is open to the public.