Williams back in K-town, working for Cape Fox 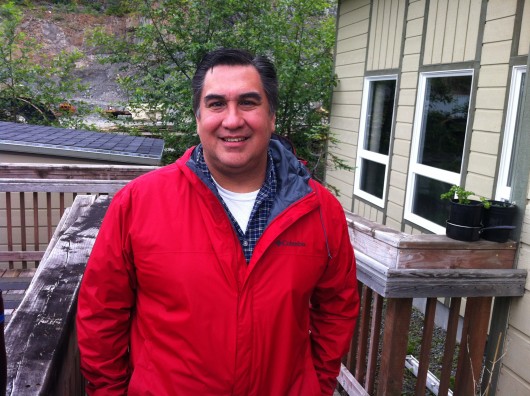 Steve Williams is moving back to Ketchikan after taking a job as Cape Fox Corp’s new business development manager. (Photo by Leila Kheiry)

Steve Williams has been on the job about a month, and said it’s all about support and growth.

“So, I’ll be working with the Cape Fox Lodge, the Cape Fox tour company and Ketchikan Title Agency and help them grow their businesses and build on the success that they’ve had over the last several years,” he said.

Williams said after the busy summer season, he’ll look for other business opportunities for Cape Fox.

Williams was born and raised in Ketchikan. His father is former Rep. Bill Williams, a Saxman Republican who also is a former president of Cape Fox, a Native village corporation formed through the Alaska Native Claims Settlement Act.

Steve Williams worked for Cape Fox Tours many years ago, and was the spokesman for Cape Fox when the hotel was under construction. He said it was important then, and now,

“That the Cape Fox Lodge is looked at as Ketchikan’s premier hotel property and not just a hotel that those Indians out in Saxman are building or operating,” he said.

He said Cape Fox has accomplished that, and the value has been recognized throughout the local business community.

In addition to positions with Cape Fox, Williams was the former roastmaster and general manager of Ravens Brew Coffee in Ketchikan, served a couple terms on the Ketchikan City Council, and was a Morning Edition host for KRBD.

With all those ties to the community, Williams said he his wife, Joanna Markell, along with their daughter, Louise, are happy to move back to Alaska’s First City.

“What we really missed about Ketchikan is our friends and neighbors that we have here,” he said. “We don’t have friends like we have here in Ketchikan, even to this day. Ketchikan is a great place. You feel really connected.”

Williams said he also couldn’t pass up the opportunity to serve his fellow shareholders with Cape Fox.

“That’s really what pushed me over,” he said. “It’s important that someone who has a vested interest in the performance of not just this job, but every company here that Cape Fox owns, or will own — someone that’s tied to it monetarily.”

On top of everything else, there was one last sign that moving back to Ketchikan was the right choice.

“How we knew that I’d be taking this job is, Joanna and Louise and I were on vacation on the Oregon Coast. Coming back, we stopped in Portland and went to REI. Joanna and I both, separately, found rain jackets on sale that we wanted to buy,” he said. “When we met each other at the cash register, we said, ‘Yeah. We’re moving back to Alaska.’”

There isn’t much call for rain jackets in Ellensburg, Wash., where they’ve been living. Williams described that area as high desert.

Markell is the former news director for KRBD. Williams said Markell is wrapping up her job as editor of the newspaper in Ellensburg. He expects her and Louise to join him in Ketchikan by the end of the year.