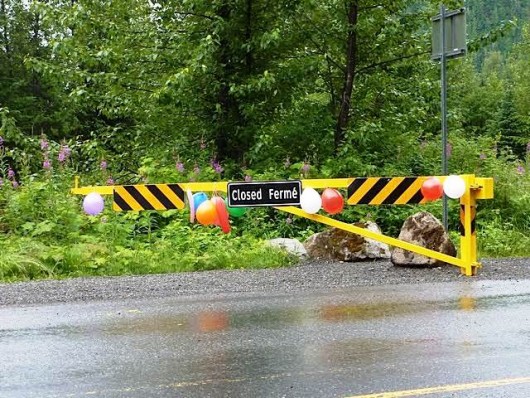 The border gate between Hyder and Stewart, B.C. is decorated with balloons this weekend, as residents celebrate a resolution to the border crossing issue. (Photo by Carol Denton)

The Hyder border gate is open, and it’s going to remain that way for the time being.

Senator Lisa Murkowski and her staff have been working with Canadian officials to find a solution to the border crossing issue since spring. That’s when the Canadian government announced that the formerly 24-hour crossing would be closed between midnight and 8 a.m., a move designed to cut costs.

In a telephone interview Monday, during a layover in Seattle, Murkowski said she’s happy with the resolution.

“Knowing that we were able to work through many, many different channels, and basically 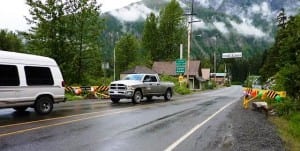 Vehicles cross the border from Hyder to Stewart after the crossing gate was opened this past weekend. (Photo by Carol Denton)

be the squeaky wheel on this, saying, ‘We’re not going to give up on this. There is an easy solution, let’s just keep working together to make it happen.” I think we saw that celebrated this weekend,” she said.

Murkowski spokesman Matt Felling said the Canadian government has agreed to a pilot program that allows people to self-report via telephone before crossing into Canada from Hyder. Electronic monitoring will help gauge how effective the new system is.

Murkowski said her office will do its own monitoring, to make sure that the border crossing remains open after the pilot program is complete.

Hyder is a community of about 100 people – that number drops a bit in the wintertime. It’s a tiny piece of Alaska on the mainland, and its only road access is through British Columbia. Hyder residents rely on nearby Stewart, B.C., for medical care and other needs. 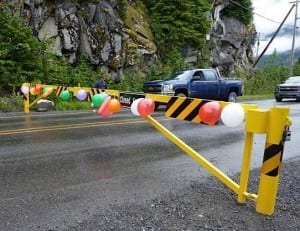 The last 8 a.m. lineup before the Hyder border gate was opened. (Photo by Carol Denton)

Wes Loe is president of the Hyder Community Association. He said that when the gate went up on April 1st, residents of Hyder and Stewart had several peaceful protests, and made sure elected officials on both sides of the border knew what was going on.

“I couldn’t tell you how many letters we wrote to Lisa Murkowski’s office, to (House District 36 Rep.) Dan Ortiz’s office. Dan Ortiz was over here, we had a town meeting, and they were just right on top of everything,” Loe said. “Then the Canadian-side government, we had meetings with them.”

Loe said the road, and easy access between the two communities, is essential, for safety reasons.

“When you only have one way out of this town, and on one end of town, we have the glacier, and then we have a hydro dam up there, and if there’s an earthquake and that dam breaks, within two to three hours, we’ll have 21 feet of water in the middle of Hyder, so that gate cannot be locked,” he said.

Loe added that the communities are intertwined in many ways. They celebrate weddings and births together, and mourn together when a community member dies. Some Stewart kids attend school in Hyder; some Hyder residents have jobs in Stewart.

“Last night, both communities had a big solstice party on the Hyder side on the river down there,” he said. “They cooked up a 250-pound pig. Everybody brought food over. It was just a big party. The kids come, the dogs come, everybody is throwing horseshoes.”

The communities also share an economic interest. Tourists flock to the area each summer to watch black and brown bears at Hyder’s bear viewing facility, run by the U.S. Forest Service. Because Hyder is so small, most tourists stay in Stewart, and cross the border early in the morning to watch the bears.