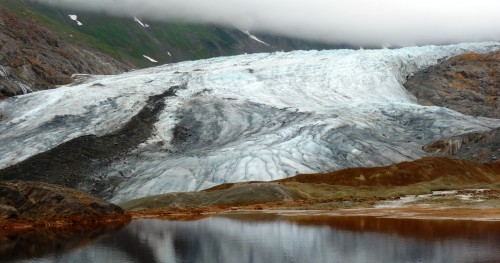 A glacier reflects in a naturally occurring pool of rusty, acidic water at the site of one of the KSM Prospect’s planned open-pit mines. The British Columbia project, northeast of Ketchikan, is drilling for higher-value ore this summer. (Ed Schoenfeld/CoastAlaska News)

A Canadian mining company says it’s found richer deposits of gold and copper ore at its controversial KSM project. It’s spending $16 million to continue to explore for more at its site, upriver from Ketchikan, this summer.

The company, Seabridge Gold, is holding its annual meeting in Toronto this week. Tribal representatives from Alaska and British Columbia plan a protest.

Seabridge says it’s continuing to define the boundaries of a group of ore bodies at its Kerr-Sulphurets-Mitchell copper, gold and silver deposit.

The northwest British Columbia mine is upstream of two rivers that enter the ocean within about 50 miles of Ketchikan. 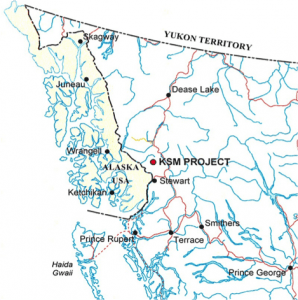 The KSM Prospect is inland from Southeast Alaska. (Courtesy SEACC)

“What we’re finding at KSM is where there’s copper, there’s gold. So, we’re also exploring for gold at the same time,” he says.

Seabridge Gold says the depth of the richer deposits may allow for underground, rather than open pit, mining in some areas. It says that could save money, as well as reduce water use and surface disturbance.

Murphy says 40 to 45 people are working at the remote site right now, with about 20 more coming later. They’ll operate up to three drill rigs.

“It’s a little bit less than last year and the previous year. Two years ago we had I think five drill rigs turning. Last year we had four,” he says.

Exploration is only part of the picture. Seabridge Gold expects mine construction to cost more than $5 billion, Canadian, and continues to seek investment partners.

The company’s 2014 annual report shows that as one of its top goals for the year, as it is for this year. It says Seabridge has doubled the number of confidentiality agreements with prospective partners, though it didn’t give a number.

“What was certainly very promising and favorable to us was the granting and awarding of the federal environmental assessment approval in late December 2014. A few companies took notice of that,” he says.

On the downside, the company acknowledges low metals prices continue to impact investments. 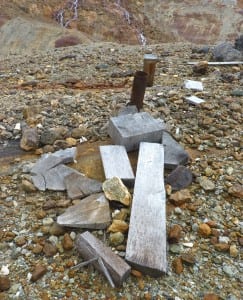 “They’re proposing to use the same discredited tailings dam technology as that used by Mount Polley,” she says. “They’re proposing to submerge tailings underwater after the mine closes, which is in direct conflict with what the expert panel recommended to reduce the potential for catastrophic failure.

She says a dry-tailings storage system would be much safer. That’s what’s used at Southeast Alaska’s Greens Creek Mine.

Murphy says the comparison is unfair. He says KSM’s tailings dam will be better built and far-less risky.

“These are much gentler slopes than what was evident at Mount Polley and are much more stable over the long term. We are also insuring that we will not have water built up within the impoundment. So water will be kept hundreds of meters away from the crest of the dam, unlike what we saw at Mount Polley,” he says.

Seabridge Gold this spring announced it had raised about $16 million, Canadian, to fund this summer’s drilling program.