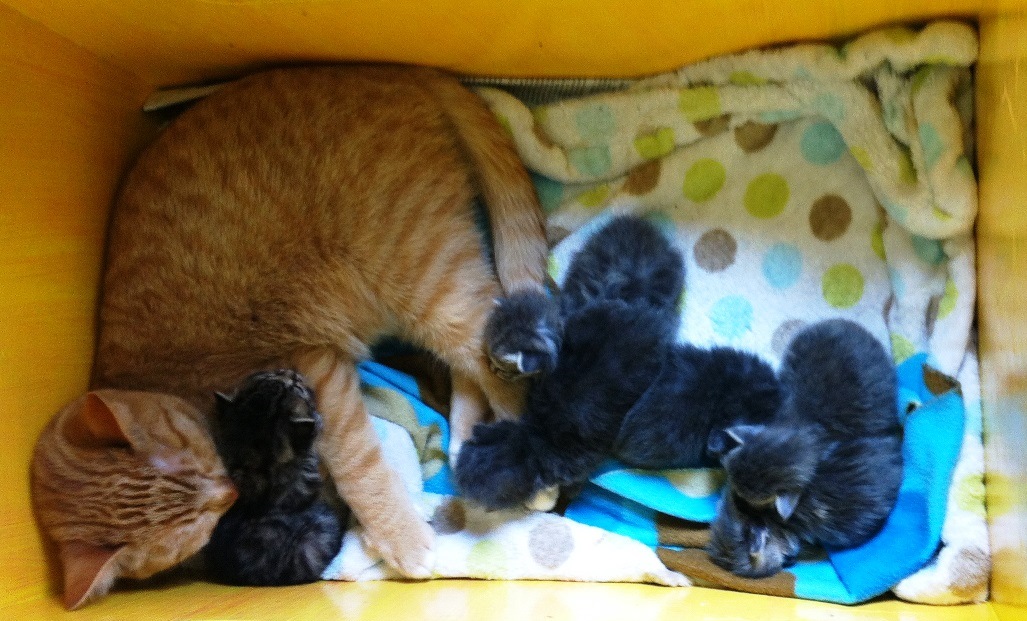 In a sad ending to what was a hopeful story, a litter of rescued kittens adopted by a young male cat have died.

The six kittens were found in May in a cardboard box on the side of a road on Prince of Wales Island. They were a little more than a week old at the time. 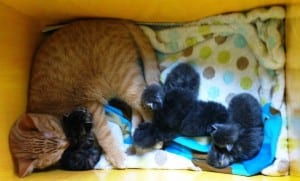 Henry cuddles with six tiny rescued kittens in May. All the kittens succumbed to kitten fading syndrome. (File photo by Leila Kheiry)

A volunteer arranged for the litter to come to Ketchikan, and Heather Muench of the Ketchikan Humane Society took over round-the-clock care and feeding, with help from Henry, a young cat who also had been rescued by the animal welfare group.

Henry cleaned the kittens, and cuddled with them in their box, which kept them warm; Muench made sure they were fed properly, and took them with her to where she works, Island to Island Veterinary Clinic. There, she could keep an eye on them and have access to quick medical care.

Unfortunately, Muench said, all that effort just didn’t equal what a mother cat can do.

“They started failing one by one,” she said. “They all developed severe diarrhea. They just became weaker and weaker, and because they were so small, it carried them off.”

Veterinarian Marna Hall also works with the Humane Society, and said kitten and puppy fading syndrome is common within the first 12 to 20 weeks, especially when they are removed from their mother’s care. She said it can happen overnight, with a seemingly healthy kitten succumbing and dying within hours.

“And it can happen for many different reasons: Infection disease, lack of proper nutrition, lack of having proper immunity,” she said.

That immunity is passed on through natural nursing. A mother cat produces colostrum in her milk, which is distributed the first few days after giving birth. That is one component to fighting disease.

Hall said there’s really no artificial substitute that compares, which is why she and Muench strongly encourage people faced with an unwanted litter to leave them with the mother, at least until they’re six to eight weeks old.

That gives the kittens a chance at life, and Muench said the mother cat is really the only one who is burdened.

“She does all the work,” she said. “It was like what Henry was doing – licking them, cleaning them, letting them snuggle. That’s the part that hard for us – it’s hard for us to replace being mama cat.”

Hall added that Muench and clinic staff did everything they could to save the six kittens.

“Medications to stop some of the diarrhea (and) when those small, little babies get diarrhea, they become dehydrated very quickly, so then supplementing them with fluids, food and medications,” she said. “(But) there was nothing we could have done.”

“You feel like you failed them, but in reality, you have to remember that all the cards were stacked against them,” Muench said.

And while, logically, she knows that she’s not to blame, it’s still devastating. “We put so much time and energy and love into these animals, and then to have them fail; it’s heartbreaking.” 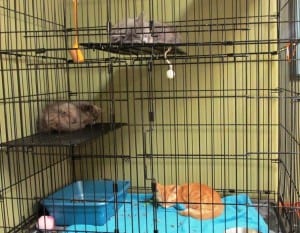 Three kittens available for adoption through the Ketchikan Humane Society take a nap in the waiting area at Island to Island Veterinary Clinic. (Photo by Leila Kheiry)

kittens in the house, and they’re older so he can play tag with them while they wait to be adopted.

Between the Humane Society, the local animal shelter and other rescue groups, there are plenty of kittens in Ketchikan that need homes.

“Kittens all over; it’s that time of year,” Hall said. “Which brings us to: Please spay and neuter.”

The Humane Society offers a low-cost spay and neuter program, in hopes of reducing the volume of unwanted litters each year. The program has been offered for a few years. Muench says she believes that’s at least partly why — while still too many — there have been fewer kittens and puppies surrendered to the Ketchikan Gateway Borough-run shelter and to rescue groups.

With fewer kittens and puppies, there are fewer unwanted animals overall.

She was close. According to a report from the borough Animal Protection Department, 74 animals were euthanized in 2014. As of this May, the total was 33 for 2015.