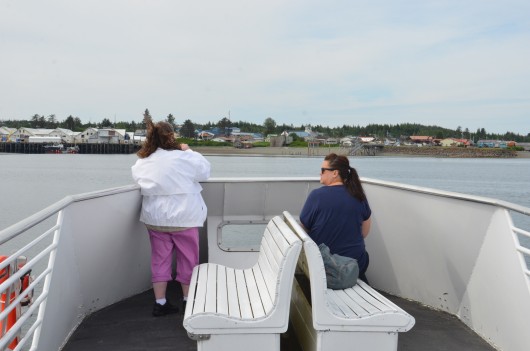 Metlakatla, the Annette Island town of about 1,400 has recently seen more visitors through the community’s tourism department. This year may be the first that tourism pumps some noteworthy money into the Tsimshian community, in Alaska’s only Native reserve.

Boarding the tour boat from Thomas Basin in Ketchikan, cruise ship passengers are offered cushioned seats, each with a map and a pair of binoculars. The tour is called “Cultural Treasures of Annette Island” and in its second year, it is still developing. 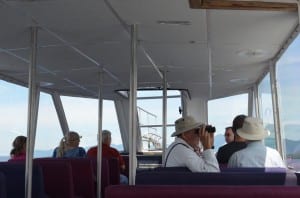 A lot goes into planning a niche tour: What tourists will see and do, what snacks to offer and what to call it.

“The name is very important. You have to be very careful about the name you select. And the first one we had to tweak quite a bit, because the first one was ‘Tsimshian Island ‘ but people had trouble pronouncing Tsimshian and didn’t know what it meant anyway.

Metlakatla has seen cruising tourists before. Small-cruise-ship company Cruise West sent ships regularly. But the numbers dropped off in 2010, when Cruise West went out of business. 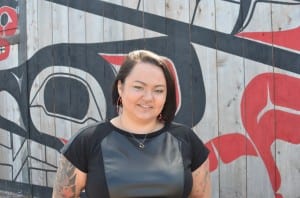 Lacey Wilson is the Metlakatla Indian Community Director of Tourism. She began in 2009 and right away she got to work revamping and realigning the tour with MIC’s goals. The new tagline for the tourism department is ‘Culture. History. Authenticity.’

“Highlighting our culture but not exploiting it in any way. Cultural protection and integrity is something that we take very seriously.”

The first major stop of the tour is the Duncan cottage. The 124 year-old building served as the town’s clinic, pharmacy, library and school.

“And in addition to all the functions it served it was also his home.”

The first room on the left was William Duncan’s bedroom. The Christian missionary who brought the first residents to Annette Island in 1887 is a major historical, but not cultural, figure. 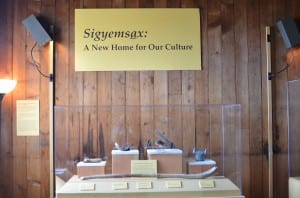 A display in the Duncan cottage in Metlakatla on July 1, 2015.

“Part of what Duncan did when he came here was start integrating us into a more Anglican lifestyle. He really honestly believed that was for our own good, so that we could prosper and live a better life, but that unfortunately meant a large amount of our culture at that time was lost.”

For example, Native language. In Duncan’s home, now a museum, everything is labeled in both the English and Tsimshian languages, something Wilson said is the only curated collection she knows like it.

Wilson said a lot of her job is working against preconceived notions.

“There has always been a really unfortunate misconception, especially in Ketchikan, that you can’t come here unless you have an invitation.”

Which she said is not true and she hopes the growing tourism industry can show that the people of Metlakatla are hospitable and willing to share their lives.

The tour offers a genuine slice of life, and at times enters working environments. The largest collection of local Native art on the island including cedar weaving and wooden fish is on display at the Annette Island Service Unit, a health clinic.

“It’s not a hospital because we don’t bed anybody down or do overnight care, but everyday general health care is what we provide here. It’s like if you were going to take a tour of Ketchikan General Hospital. You have to kind of stay out of the way as much as you can.” 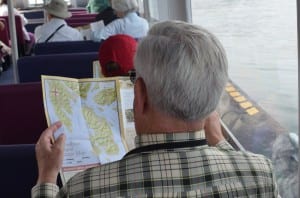 A group of 12 older white people with khaki nylon fishing hats traveling by motor coach definitely stick out, but for the most part are welcomed.

One of those tourists, Tim Scobie from North Carolina says the tour was enjoyable and educational.

“I thought they were maybe Aborigines, but they weren’t. They came from British Columbia, which I didn’t know.”

The highlight of the trip for most is the dance performance. 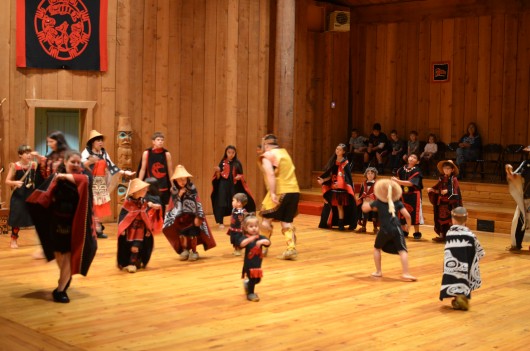 Tsimshian dancers in the Metlakatla longhouse on July 1, 2015.

Many of the dancers step away from day jobs for an hour to dance and sing for visitors. The dance groups are paid and can earn between $10,000 to $15,000 in a year. The money helps support travel.

The dancers aren’t the only residents benefiting financially from tourism in Metlakatla.

“While we are not a non-profit, all of the money we make from this directly supports our community and community members.”

The profits feed into a general fund, which is redistributed to programs, such as social services and preschools. Fishing has long been the biggest industry, but the community has been trying to diversify its economy, including building a gaming hall in 2001.

Wilson hopes that tourism can be a real player in the financial support of her community. This year may be the first in a long time where tourism brings in solid profit. She said besides money, tourism offers opportunity.

“Like Raquel here she is only 16 years old, but working with our program and part of her training she is going to be gaining some real-life skills that can be very valuable to her in the future. Like public speaking , working with members of the community, working with guests.”

Wilson got her start the same way. Leading tours right out of high school, and while she says she accidently fell into the career, it’s one that suits her. She wants to support her community, and she believes a growing tourism industry can do that.