Much of Ketchikan experienced power outages on Saturday and Monday in the early morning hours. These two separate incidents were caused by a car colliding with a pole and an eagle crash-landing, respectively. 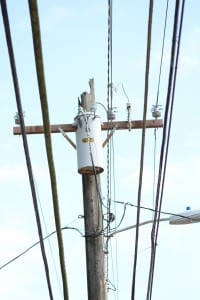 The pole damaged by a motorist that caused Saturday’s power outage.

Saturday around 5 a.m., parts of Ketchikan experienced power outages due to a motorist hitting a utility pole in town. Ketchikan Public Utilities Electric Division Manager Andy Donato says the condition of the driver is unknown. However, he says it doesn’t take high collision speeds to damage power lines, even though they’re far above the ground.

“The wires are pretty much in tension, and so knocking the pole on the bottom can easily break the devices up on top. You know, considering the length of the lever arm, they’re up 40, 50, 60 feet. “

And then Monday, early birds experienced another power outage in Ketchikan after an eagle flew into powers lines near Herring Cove before 5 that morning. Power was restored for much of Ketchikan by 5:30 a.m. with some lingering problems near The Plaza, which Donato says were fixed by 7:32 a.m.

Donato says this sort of fatal crash landing is most frequent near fish processing facilities, where birds swoop in to pick up scraps scattered in the area. He says many  lines by the Mountain Point boat launch and in the Herring Cove area do have so-called “flight diverters,” which are spirals attached to power lines designed to alert  birds to the existence of the wires. Monday morning’s bird crashed just outside of the area with the preventative spirals.

Donato says the flight diverters do need to be expanded in the high density areas, as shown by this last incident, but otherwise have been a complete success.

“We haven’t had a strike in that zone yet, and previously we had many, and so this was just off of that area.”

Hopefully these preventative measures can keep residents from oversleeping due to powerless alarm clocks, and even save a few birds in the process.