DOR commish: ‘It’s only a crisis if we fail to act’ 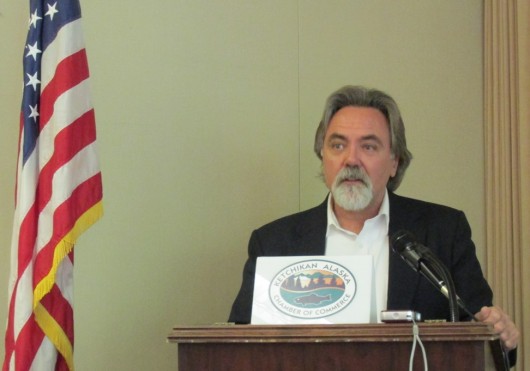 Department of Revenue Commissioner Randall Hoffbeck said Alaska’s budget situation is serious, but he doesn’t think it’s quite the “crisis,” that some have called it. Hoffbeck spoke to the Ketchikan Chamber of Commerce on Wednesday, and presented some options under consideration for changing Alaska’s fiscal future.

Anyone who has been paying any level of attention to statewide news this year knows that the state is going through some budget challenges.

Low oil prices are the big reason for a $3 billion deficit, and the price of oil isn’t expected to rise anytime soon – at least not to a level that would fill such a large revenue hole.

Some have characterized the situation as dire, but Revenue Commissioner Randall Hoffbeck said it’s an opportunity to make some changes.

“It only really becomes a crisis if we fail to act,” he said.

The challenge is how to make up for a $3 billion loss. The solution, Hoffbeck said, likely will lie in a combination of cutting spending, modifying oil taxes, increasing or creating new state taxes, and using investments, such as the Permanent Fund.

Hoffbeck said cutting spending will not work without also increasing revenue. He said the state has spending obligations, such as education, debt repayment, retirement costs and health care. There’s not much, if any, leeway in those areas, which total more than the deficit.

“So, you could cut every department out of state government, only have schools, health and some general obligations, and we still wouldn’t be close to being balanced,” he said.

And other parts of the budget already have been cut. Hoffbeck said any more cuts in those areas, and state programs will be lost.

In spite of that, more spending cuts will come up in the next budget cycle, paired with proposals for increasing revenue. None are going to be popular.

“I was talking to my wife about what this summer was going to look like as I travel around the state and talk to people about what we’re going to have to do to balance the budget,” he said. “I told her, ‘If I do my job right, by the end of the summer, I could be the most hated person in the State of Alaska.’ She said, ‘I’ll still love you. But don’t take my dividend.’”

Many state residents depend on that annual income boost, either for splurging on items they normally can’t afford, or to help pay the fuel bill in the coming months.

Hoffbeck noted that the Permanent Fund initially was set up to help pay for government. And, he said people still will get a PFD. One concept that’s been proposed would simply cap the individual payment.

“Unfortunately, our timing on this is going to be difficult,” he said. “If we had put a proposal out two years ago, when the dividend was $800, that we’re going to cap your dividend at $1,200, I think people would have been OK with that. But we had an $1,800 dividend last year, and we’re probably going to have a $2,000-plus dividend this year. And now if you say we’re going to cap it at $1,200, people are saying, ‘you’re taking our money from us.’”

But, if the state did take some of the earnings and invest it in a separate endowment, earnings from the earnings could help fund government in the long term.

For the short term, taxes are a likely solution.

“If you look at the actual United States average for taxes per capita, it’s about $2,200 per person. Alaska right now, we’re paying just a little over $500 per person,” he said. “We’re by far the lowest personal tax regime anywhere in the country.”

Some of the tax options Hoffbeck mentioned included a state sales tax or state property tax – but those would encroach on taxing powers of local governments. One idea that has been gaining support is a state income tax.

“What’s been proposed had a 15 percent of your federal tax liability – not 15 percent of what you make,” he said. “That, plus the 10 percent capital gains uplift, would generate probably $500 million in taxes in a year.”

That wouldn’t close the budget gap, but it would be one step toward getting out of the red.

Hoffbeck said he and other state officials want to hear from Alaskans about all the proposals, and maybe get some new ideas. No matter what, though, he said Alaska’s budget solution will not be easy.

For anyone who would like to try balancing Alaska’s budget, there is an online revenue and expenditure model, along with other budget details, on Gov. Bill Walker’s website: http://gov.alaska.gov/Walker/priorities/transition-2014/sustainable-future/the-conversation.html