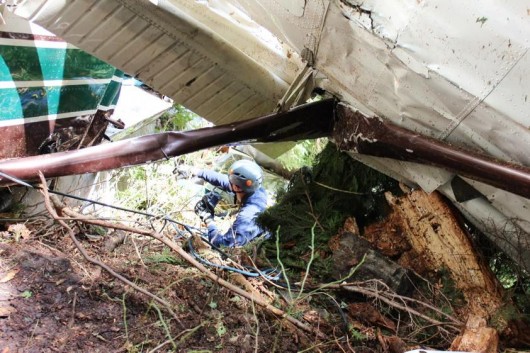 A June 25th deadly plane crash in Ketchikan remains under investigation; something the National Transportation Safety Board says could take as long as a year and a half. However, just cleaning up the wreckage is also taking a while, begging the question, who’s responsible for it?

The National Transportation Safety Board says it’s not their problem. The Alaska State Troopers says it’s out of their hands. And while the Ketchikan Volunteer Rescue Squad secured the plane to the mountainside, they’re saying it’s no longer up to them.

The DeHavilland DHC-3 that crashed near Misty Fjords National Monument, killing nine, still clings to the side of a rather rocky p lace.

Chris John is with the Ketchikan Volunteer Rescue Squad. He says the squad’s job was to try and rescue anyone who may have survived and make sure the area was safe for NTSB investigators.

“As far as this accident, we are probably done with our involvement. We do sometimes go back out when parts of the wreck are recovered. Our role is usually to make sure it’s a safe situation… it’s pretty rugged up there.”

The investigation is ongoing, but the NTSB says it has nothing to do with plane removal.

So how is this remedied? Just left large piece of twisted metal stuck on a mountainside?

As it turns out, Temsco Helicopters, which originally found the crash site and helped with the rescue mission, has volunteered to help fly the wreck out. Except there’s one problem: the only helicopter big enough to retrieve the aircraft is up north, fighting fires.

This leaves some of the volunteer rescue squad’s ropes and straps, securing the plane, up on the mountain with the mound of metal.  Eric Lunde, another Ketchikan Rescue Squad volunteer, says the weathered equipment will have to be replaced. Lunde says either the Troopers will help refund the  lost items, they will have to ask for grants or, most likely,  KVRS  will have to ask for donations to make sure they’re ready for future missions.

“The state troopers, the state will reimburse us, although the state’s budget isn’t looking very good. In the past, that’s how that’s worked. But a lot of the stuff, we seek grants where we can. Lots of personal donations. Lots of just our membership donates money, sometimes enough. Sometimes we need something; sometimes some of our members will just go buy it.”

While Temsco officials say they still plan on extracting the plane, they won’t guarantee anything until the large helicopter returns from the blazes up North.