Eagle statue replacement not quite ready 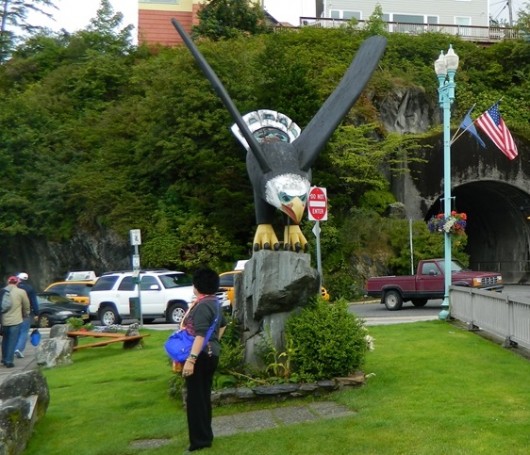 Thundering Wings is seen in summer 2013 before the deteriorating sculpture was removed. Its replacement is not quite ready. (KRBD file photo)

Council Member Matt Olsen said some constituents have asked him about the progress on the replacement carving, “And I’ve been wondering too. What’s the update on the eagle statue?”

Assistant City Manager David Martin said Master Carver Nathan Jackson continues to work on the replacement. It was going to be ready by May or June, but…

“When they were getting ready to get it put together to bring in, one leg was a little bigger than the other, so they’re having to go back and trim down one leg,” Martin said.

He said he can’t predict at this point when the carving will be ready for placement in Eagle Park near Ketchikan’s downtown tunnel. However, “From the pictures I’ve seen and from being out there and seeing it done, what you’re going to get is a fabulous piece when it’s completed.”

Jackson carved the original Thundering Wings, which depicts a bald eagle taking flight. The original had started to deteriorate, and the city hired Jackson to carve its replacement.