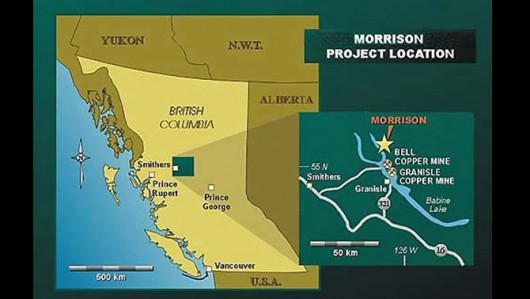 The proposed Morrison Mine is near Lake Morrison, in the Skeens River watershed. British Columbia says its environmental permit is not ready for consideration. (Image courtesy Pacific Booker Minerals)

British Columbia officials are delaying permits for an open-pit mine near a river that flows into the ocean south of Ketchikan. They say Pacific Booker Minerals has not proved it can keep toxic water out of nearby waterways. The developer says it has.

The proposed Morrison project, owned by Vancouver-based Pacific Booker Minerals, is about 200 miles east of Ketchikan. The mine site is in the watershed of the Skeena River, which doesn’t flow through Alaska. But it enters the ocean about 50 miles south of the border.

Juneau mine critic Chris Zimmer works with Rivers Without Borders, an international organization. He says Alaskans catch fish out of the Skeena.

“If we see crashes in salmon populations in rivers like that it could affect Alaska fishing,” he says.

“So even the rivers that don’t flow right through Southeast Alaska are still pretty important to our own fisheries here,” he says.

Pacific Booker turned down an interview request and answered only half the questions submitted in writing. But its website, and documents filed with the province, provide insight.

The Morrison deposit was discovered by another company in the 1960s. Pacific Booker conducted exploratory drilling and began collecting information for its environmental permit about a dozen years ago. 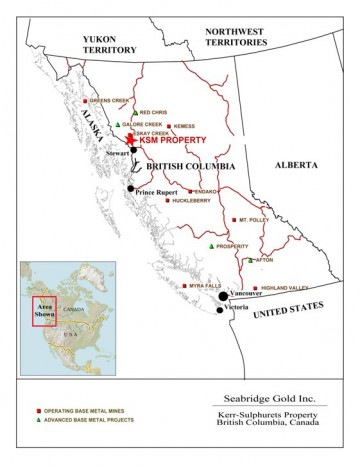 The KSM, Red Chris and Galore Creek projects are among several others planned for northwest British Columbia, near the Alaska border. (Map courtesy Seabridge Gold)

The company says it has identified deposits of copper, gold and molybdenum. The proposed open pit project, next to a lake, is within a dozen or so miles of two similar mines, which are closed.

“PBM is committed to constructing and operating the Morrison mine in compliance with industry best practices, using proven technology and in full compliance with all permit requirements,” wrote Director Erik Tornquist, in a June press release.

“We’ve said, ‘You’re heading in the right direction, but you have a lot more work you need to do before we can think about granting a permit’.”

Bennett says the company has not proved the project design is foolproof. The province needs more information showing its tailings storage ponds won’t leach polluted water into a nearby lake.

Earlier this month, his agency and B.C.’s environment ministry told Pacific Booker to take another three years gathering that and other information.

“We are the regulator. We tell the companies what they must do in order to earn their permits,” he says. “And if the company can’t afford to hire the experts, the scientists who provide the information, they do. And if they cannot afford to do that, then obviously, you don’t hear from then again.”

But they will. Pacific Booker quickly issued a press release saying it’s consulting with professional advisors “on the best method to address the issues raised.”

That could be legal action. The company sued the province after a 2012 permit application was rejected. That case went before British Columbia’s Supreme Court, which ruled in its favor and sent the issue back to the government.

Bennett says his agency will scrutinize permit applications for this, and other, mines that could affect Alaska fishermen.

Critics on both sides of the border doubt that will happen.

“How rigorous is that process going to be? Or could this mine somehow slip through and the concerns raised by B.C. over the past couple years not get addressed?” asks Rivers Without Borders’ Zimmer.

He points to similar mines he thinks are unsafe that won permits, such as the Red Chris in the Stikine River watershed.

“The B.C. permitting process is mine-by-mine. But right now, there’s no way really to answer the question, what happens if B.C. does put in a couple dozen of these mines over the next decade? What’s the overall long-term effects of that?”

The provincial government supports increased mine development and has added staff to speed the permitting process.

Lake Babine Nation Chief Wilf Adam, in a recent letter to the mines minister, says “we have no working relationship or dialog” with Pacific Booker.

Leaders of the Gitxsan and Gitanyow First Nations sent a letter saying, “… this mine proposal poses a significant risk to our salmon fisheries and hence to our way of life.”