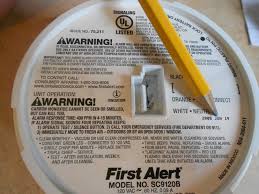 An incident last week at a Bear Valley home sparked a reminder, both literally and figuratively, to check your smoke detectors, and possibly replace them.  Chris Grooms is the Ketchikan City Fire Marshall.

“At approximately 10 pm, the smoke alarm started beeping, and it stopped. Again at 11 and at midnight. At midnight the residents smelled smoke, realized it was coming from the smoke detector itself, and took it down, looked on the back, and it was blackened from arcing within the unit itself.”

“It’s like a spark actually. When you rub your feet on the floor and you touch something metal and it sparks. That’s very similar. Except this is a charged wire that wants to connect, and continues to arc across because it’s not making a good, solid contact.”

“It will say right on the back, what date it should be replaced by. They are not supposed to be used more than 10 years at any time. So if you have smoke detectors and you know they’ve been there for a long time, it’s worth taking those down and replacing them.

If you see a detector smoking or on fire you should call the fire department immediately rather than try to remove it or put out the fire yourself.

“Not many people have a small ladder in their house that they can reach up and grab that on a quick basis, and it’s probably not the best thing to do anyway. There could be fire already in the ceiling or in the wall, and you could get seriously burned or make the fire situation worse.”

Grooms say fire can spread quickly and it’s important to leave the house and call 911 when safely outside. He advises testing smoke detectors monthly to make sure they are functioning. He also says it’s important to check the date on the back of the detector and replace it if necessary.