Rescue squad stays ready for the next emergency 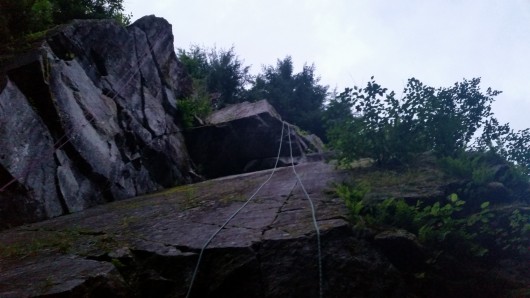 A rock face north of Ketchikan where KVRS members train.

The Ketchikan Volunteer Rescue Squad was the first group on the scene of a deadly float plane crash near Ketchikan more than a month ago. They were the ones who discovered that there were no survivors, and, later, helped recover the remains. The wreckage, also, has now been recovered, and KVRS’s work on that incident is complete, but the group keeps busy, making sure they’re prepared for the next time someone needs their help…and they do it for free.

Ketchikan Volunteer Rescue Squad is like a family. Some are connected by blood or marriage, but this largely unrelated group comes together to train and prepare for bad situations, like a lost hiker, or an injured logger, or a downed plane.

KVRS volunteers work for hours without pay, practicing rescue techniques like tracking and rock climbing. It was Jessica Rusher’s first time climbing last Wednesday, and many of the team members were there to teach her and cheer her on.

“Keep pushing up with your feet until you get past that, stick your feet in the crack…there ya go! Go, Jessi, go! Go, go, go! Oh, gnarly!”

I even gave it a shot. Though I’ve climbed a few times before, backing over a 60-foot rock ledge is always a bit nerve-wracking.  Kara Lunde talked me through the support system, safe for holding up to 1,000 pounds. This knowledge and her kind words eased me over the edge.

“Right now you’ve got some slack so you’re going to have to lean back, so just trust the gear. And there’s going to be a little stretch of the rope, there ya go, perfect!”

After some heart pounding, I made it safely to the bottom, no worse for wear. 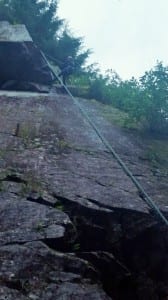 Reporter Madelyn Beck belaying down a rock face with the help of KVRS members.

While some of it can seem recreational, when the fun turns to work, all that practice and team building is necessary. KVRS members say they need to know they can trust each other when tragedy strikes. After the last mission with the Misty Fjords plane crash, Eric Lunde says he’s thankful his employer gave him a day off to recover, and he spent that day with his crew.

“Several of us went out for breakfast and then ended up going for a hike out to Perseverance. Went for a swim. Talked … So that was very helpful for me before I, ya know, had to go back to regular life again.”

These volunteers all have families and jobs outside of the rescue squad. Many say they joined because they enjoy being outdoors and like knowing they can help someone else.

Brett Serlin says his father-in-law, Eric Muench, helped introduce him to KVRS, but he joined because he knew the rescue squad may have to rescue him one day.

“I had moved to Ketchikan and the thought process was, you know, at some point it could be me needing assistance. So while I’m able to, I should make myself available to give someone else assistance.”

Eric Muench is the self-proclaimed oldest KVRS member. He’s been part of the rescue squad for 52-and-a-half years, and while he largely works from the sidelines now, he says he’s seen too many situations to remember.

Though he wasn’t around then, he says the rescue squad started back in 1950, after a plane crash.

“I think a Pan America plane, it was, that went in, and then just a local guys got together and did what they could. Got the people out. Had to go up a mountain to do it in the winter time.  I think that’s when they decided that it was a good deal to be able to get people together.”

Muench says that because KVRS is made up of locals, it’s unique in what it can do.

“We’ve got these other agencies, like the Coast Guard and the Forest Service people and the state troopers, and you know, they’re good at what they do, but they can’t turn out the manpower to start with. And one of the advantages of this local group is we know the country pretty well.”

Since then, the group has grown and shrunk year to year, but has hung on with grants and donations. They built their own operations room off to the side of a firehouse north of town, and that’s where they meet to debrief missions, train, and where they monitor for any potential situations via radios and transmitters.

At the moment, the group has about 45 members, but only about a dozen (gather) regularly. Even so, like a family, they say it’s great to meet up when they can. Especially when it’s on a nice, clear day for some rock climbing.

“Kara, are you weaving the rope?”

“Are you forging carabiners right now?

“I saw her take her anvil up there…”

“I have to reset it a little bit.”

The team accepts new applicants of various skill levels. If you want to apply or find out more, visit their Facebook page, here.