Tourists in search of weed 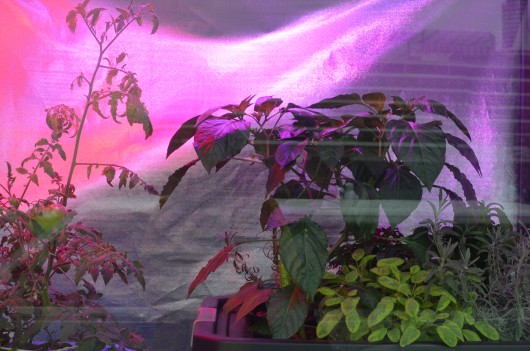 Herbs and vegetables grow in a window display at Yukon Grow Your Own on July 30, 2015.

A few downtown Ketchikan shops are taking advantage of marijuana legalization in Alaska. Some are selling pipes and one is an indoor grow shop, but visiting tourists often are looking for more than lights.

Tourists stop to lean into windows with lush green –not pot- plants bathed in purple light.  From the front door of Yukon Grow Your Own downtown, three cruise ships are in sight. A couple wanders in through the open door where Greg Vera is working.

“Welcome. How you doing today? You from southern California as well?”

Vera talks about legalization and also about salmon.  He explains where Alaska is in the legalization timeline. That it was decriminalized, but there aren’t regulations yet to sell it. This conversation happens a lot.

“About 80% of the tourists want to buy weed. They’re trying to hook up somewhere. ‘Hey man can you help me’ I said well we don’t have those regulations yet so I can give you everything you want to grow it.” 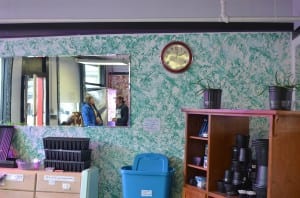 The store sells LED grow lights, plumbing, plastic pots and a variety of fertilizers, in addition to snacks.

He spends his working hours, 9ish to 6ish, caring for plants. He takes pride in his window displays, and doesn’t mind too much answering questions about weed.

Next door at Two Hippie Chicks, owner Liz Martin says the constant question of where to buy weed can get irritating.

“Well when I have a store full of people, you know after any particular given day,  you can have upwards of 10 or 15 people ask me the same question. I just said I got to do something, which is why I put up the sign.”

A typed message on computer paper sits on a cabinet display of small pipes. “If you’re not 21 years old please don’t ask me about these smoking accessories, because I can’t sell them to  you. Yes recreational marijuana is legal in our state. No, I don’t have any to sell you just yet.”

There isn’t a sign down the street at the Alaskan Pipeline where Dustin Pomeroy sells smoking accessories, but he said he has been asked enough to be annoyed, especially because he wants to help.

Although he can’t point them anywhere specifically, Pomeroy does try to help. He advises tourists to do the same thing they would do if there wasn’t a bong shop. “Go to the bar and make a friend. Go ask someone who is not getting paid right now. Go walk around and ask someone not in a shop.”

He thinks people expect the shop to sell weed, and maybe in a year they will. Martin says the same.

“I know that it will have to be probably separated from my retail business here that I currently have, but if for no other reason than to say yes I can. I can sell legal marijuana over the counter and I want to be able to do that.”

Vera, with about 40 years of growing experience, says knowledge should be free, and there are a lot of questions people are sheepish to ask.

“Everybody wants to help everybody grow pot. I personally would love to see you flourish growing your own weed, because everyone should be able to do that now that its legal.Heck.”

Vera offers growing classes every other Saturday at the shop to share his knowledge of root systems, phosphorus, nitrogen and hydroponics, and to encourage locals to grow their six legally allowed marijuana plants.