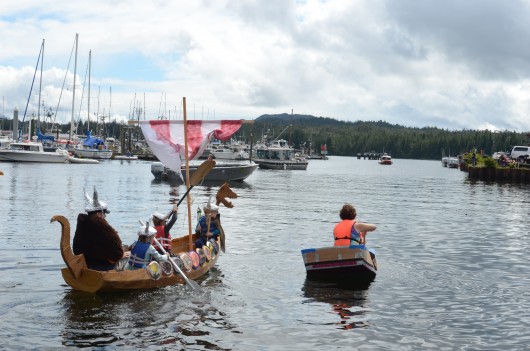 The Johnson family and Barbara Morgan race in the Blueberry Handmade human-powered race in Thomas Basin on August 2, 2015.

Thomas Basin was both the start and finish for the first ever handmade human-powered boat race Sunday during Ketchikan’s Blueberry Arts Festival.

At first there were two- Barbra Morgan with a cardboard boat, and the Johnson family with a wooden boat for four. Garrett Johnson said before he heard about the race, the boat had been a family project for a few months.

“Cutting the tail and the head.” “Yup. Ellie cut the tail, Scott cut the head. Dean was helping spraypaint.” 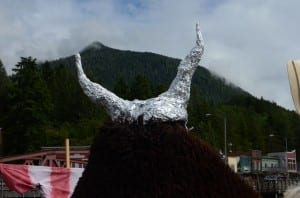 Garrett Johnson  from the “Viking Invader” with helmet.

The gold head and the tail turned the wooden boat into the ‘Viking Invader’ and mom Nicole Johnson made Viking helmets out of aluminum foil.

Before the whistle blew, a third boat game down the gang plank- Cullen’s Crappy Craft. Amy Cullen said the family constructed the boat earlier that morning using, among other items, milk jugs and zip ties.

A crowd of locals, tourists and bridge fishermen watched as Marni Rickelmann from the Arts Council counted down. “Okay racers on your mark , get set. Beeeep.”

Morgan and the Johnsons set off quickly, while the Cullens struggled to stabilize. “Use the paddle to stabilize.”  “There is no way this thing is going anywhere.” 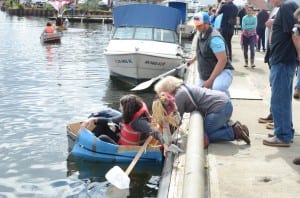 Amy Cullen holds on the the dock for fear of falling.

Everyone walked away a winner, some a bit wetter than others. The Cullen’s took ‘Most Likely to Sink’. The Johnson family took first place, and Morgan won most creative.

Morgan’s boat buckled at the knees and started to sink, but she swam to finish the race. “It would have been easier if I wasn’t towing my boat because I could only use one arm to paddle.”

The Arts council expects more entrants next year, and Morgan said she’ll be back with a few more layers of cardboard.